Coat update!  Last time you saw it, it was all in pieces.  I’d done the interfacing and needed to tailortack and then get cracking!  So that was Thursday morning’s position.  By the end of the day I had assembled the hood, the back, the sleeves and the two fronts with the welt buttonholes.  I’d left the pockets to the last, because I knew it would be fiddly because of the bulk of the fabric.  Actually, they were fine, and the rest went together really well.

Things got really tricky with the front tab and collar, there were so many layers of wool that it was tricky to get it all in under the foot of the machine.  This is one of the times when I am very happy to have a sewing machine that weighs so much!  I really don’t think I’d have been able to manage with a modern, lightweight machine.  Then adding the front fastening band made more bulk and made things worse.

I am unhappy with the position of that piece, I couldn’t get it higher as the machine pushed it down every time I forced it under the foot, even when I basted it in place.  It also seems to be too far from the centre front, and I think that’s because of the width of the zipper.  I really should have attached the band closer to the front.  Monday wasn’t a great sewing day, I had a re-occurence of my nasty headaches and attempted to work through it.  It wasn’t one of my best ideas, and I had no relief the next day either.  So now I have a pretty much finished coat, but I’m unhappy with that band and know it will be a mission to move it.  So I’m inclined to leave it.  But I know it’s not right.  Grrr

In contrast, the sleeves went in so easily!  If you’re making a jacket or coat, run a line of long gathering stitches 2cm from the edge of the fabric, just one line, and pull that up slightly, to give you the shape of the sleeve head.  Then pin it into the armhole with the armhole folded back, and the sleeve over it.  Next, pin on the stitching line, parallel to the stitching line, easing the fullness into the sleeve head.  It’s fiddly and the pins bite, but it gives a great finish.  Then you sew the seam from the inside, the sleeve side up, picking out the pins as you get to them and using both hands and almost all your fingers to smooth out the fulness and avoid puckering.  Once you’re happy with it and the hang is good, sew in the sleeve padding.  This can be purpose made wadding or you could cut bias strips of your fabric and fold in half longways.  Stitch just before the original sleeve seam and fold it over and into the sleeve head.  Some jackets need this step, some don’t, it all depends on the look you’re after.

The lining is in, and the hem handstitched in place.   The lining is from The Lining Company.  It’s an acetate/viscose twill, and it’s shot, so you get a lovely shade of colour, depending on the direction in which you view it, and which side you use!  I chose  the Light Blue Fawn colour, which looks fabulous with the colour of the wool.  I’m using the blue-er side but have decided to use the other side which has more of a gold tone to cover the snaps for the front.  I was hoping to find a brass/bronze colour snap in the time I had, but I couldn’t.  So simple silver snaps are now covered with the lining. 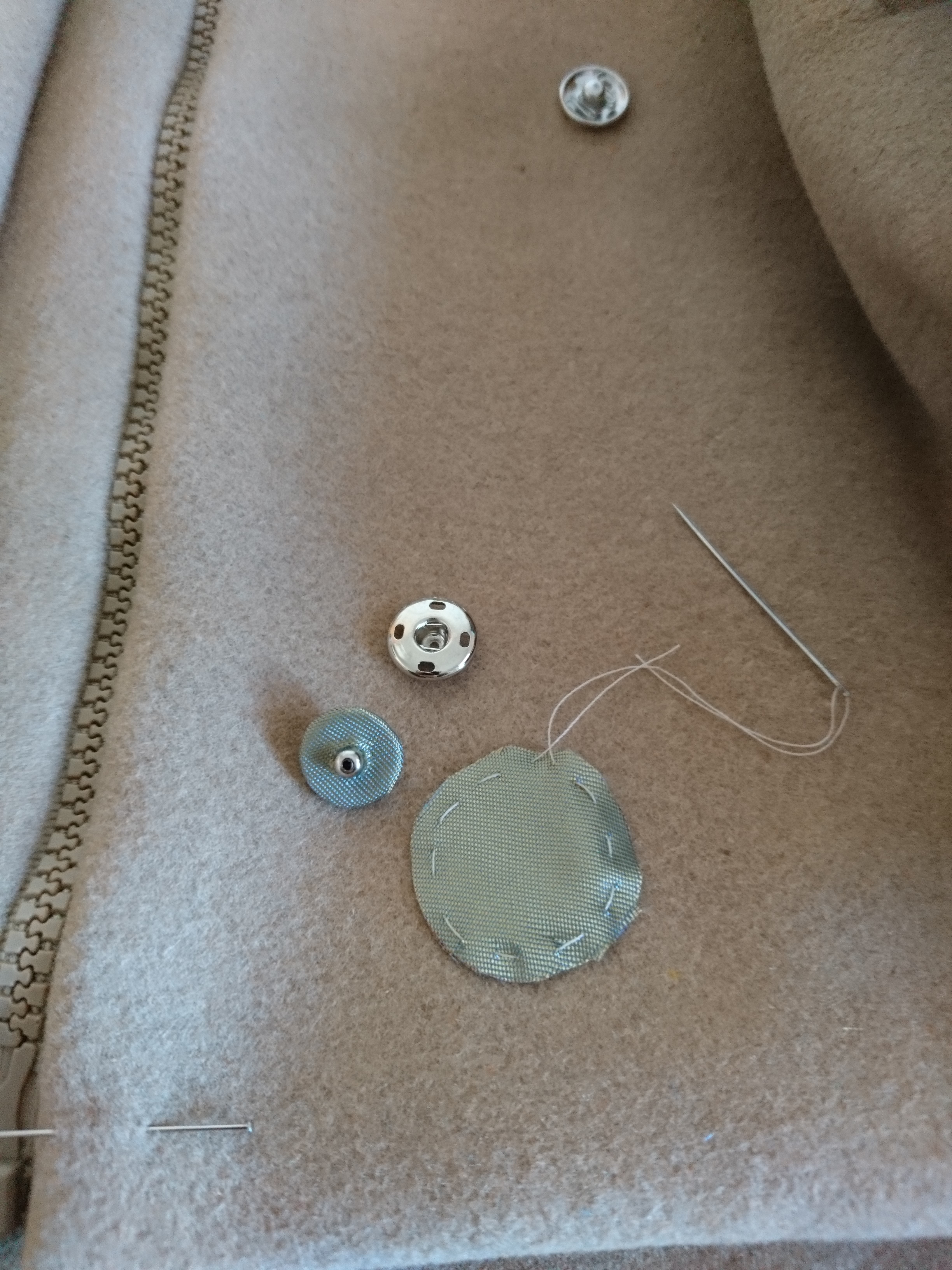 I had originally intended to finish the coat to wear to the Knitting and Stitching Show in London tomorrow, but the weather is not showing me I’ll be needing it, and I haven’t got the fastening band buttonholes done yet either.  I guess that although my headaches have finally passed, I’m not in quite the right place to finish today.  I’ll get it done over the weekend, and hopefully some proper photos will follow soon!  In the meantime, I’m looking forward to my first visit to a big London sewing show!

I’ll show you what I buy over the weekend, all the fabric I bought at the NEC earlier this year has now been made up, so I’m kinda justified in getting a bit more! 😉  And I would love to find the perfect fabric to make up another dress, The Assembly Line’s V-Neck Dress.

I realise that all of the posts in the last few years have been completed projects. I used to photograph as I sewed, I even posted as I worked, with the finished project at the end, nicely modelled on the daughter for whom it was made. So I thought, I might start that again! I’ve been working on a jacket for daughter no 1 using a 1m length of Linton Tweed. I like mixing things up a little, so I suggested we make a biker style jacket with the fabric, rather than something more predictable. That got the thumbs up!

I’m using the same Burda pattern as I did last year when I worked on the Refashioners project. This time, however, I’m not changing the pattern, because I don’t have to! 😀 So how far have I got? Well, I’m almost done… I cut and interfaced yesterday, block fusing so if there was any shrinkage it wouldn’t affect the pieces too much.

Today I did most of the construction, I thought I wouldn’t get as far as I did because I had ordered the zips online from Jaycotts and wasn’t sure when they’d arrive. Luckily, they came today! I used a black piece of wool for contrast and bulk reduction in certain areas, the welt for the pocket, facings, inner cuffs, waistband pieces & inner collar.

I think it’s worked rather well! I needed the bulk reduction, this tweed is chunky! I’m actually using the wrong side here, we decided it was less busy, and more likely to be worn this way around. 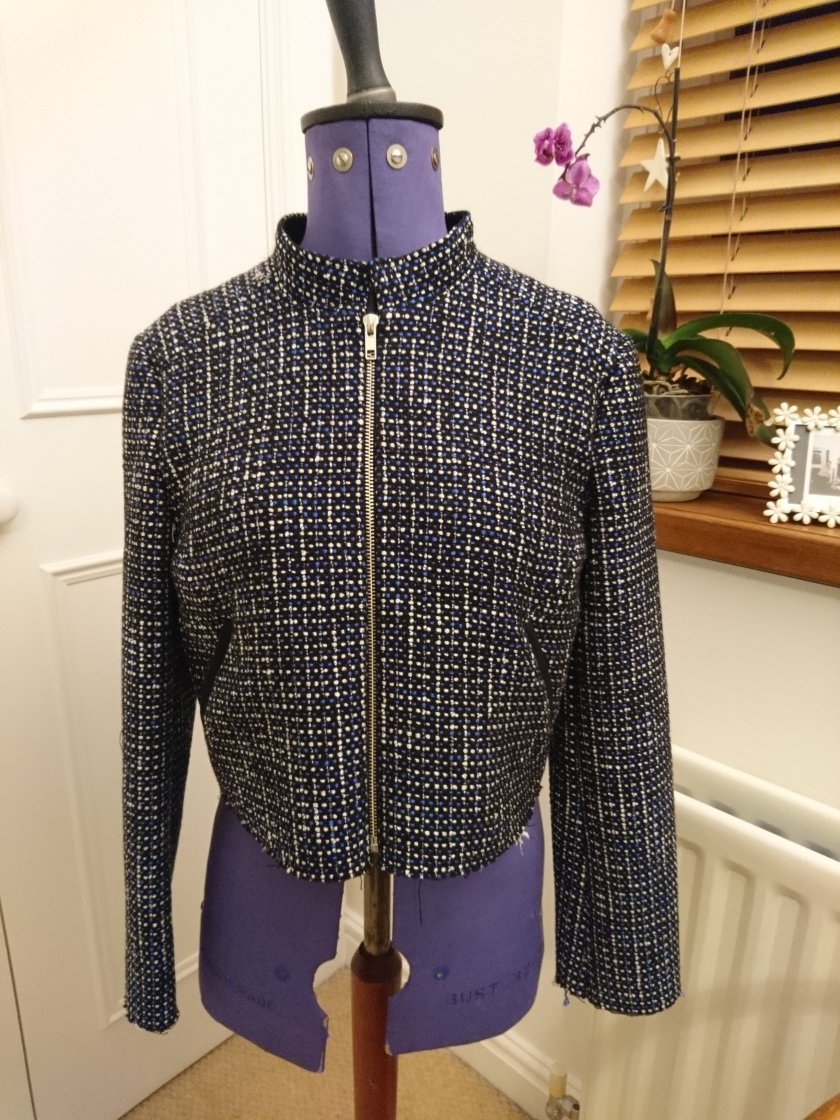 This is what it looks like tonight, with just the lining, waistband, cuffs & snaps to go. Now my eyes are tired and it’s time for bed!