And patterns unmade!  There’s one problem with buying Burda magazines every month for the last 20 years.  I have loads and loads and loads of patterns that I thought I’d make but have not got round to.  During Me Made May this year I spotted a rather nice top on my IG feed.  Turns out the pattern was one from a Burda magazine that I’d marked to make – you know the rest!

Having identified a lack of white tops in my wardrobe, it was decided to make the pattern up in some gorgeous white viscose voile from Croft Mill.  This fabric is to die for, just beautiful (but no longer available!).  Having bought 2 metres and found just how lovely it was, I immediately got another 3 to hide in the stash!  I know I’m supposed to be clearing it out, but this will be a useful stash, white never goes out of fashion.  *whispers* and I could always die it… 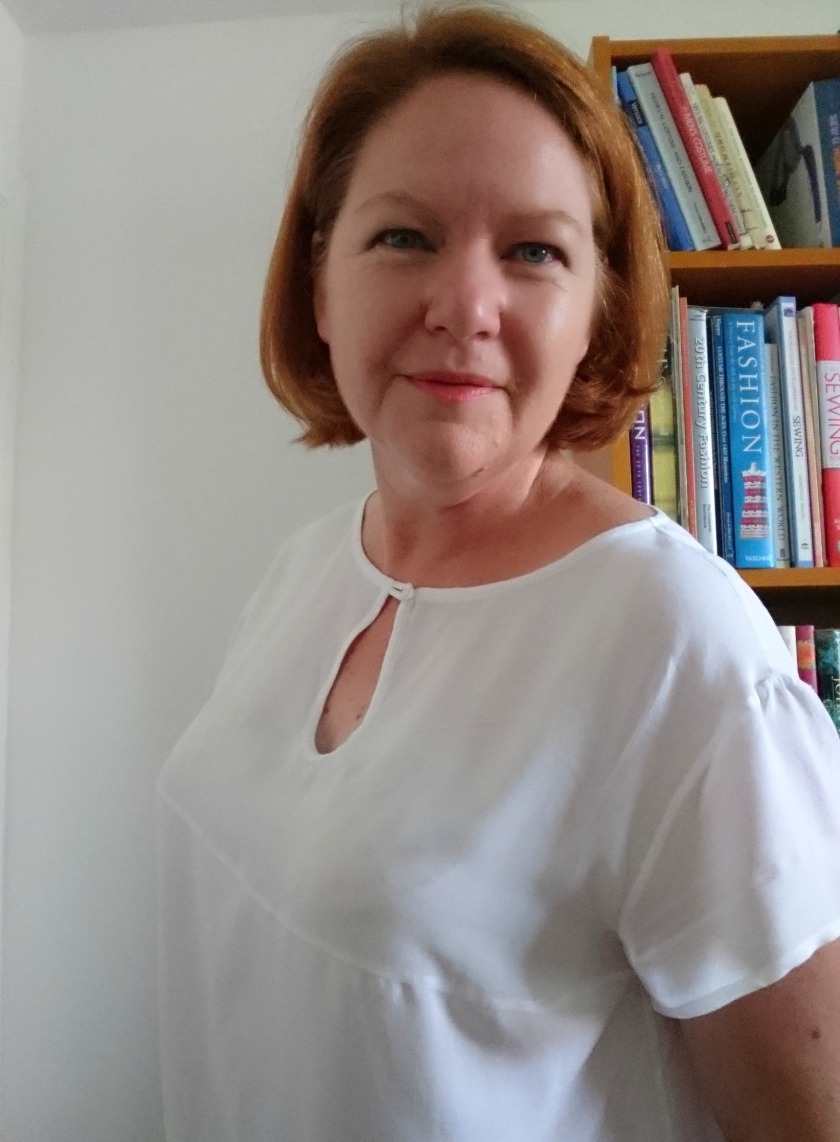 The pattern is 124 from May 2015, available from the Burdastyle site as a download here.  I traced the 44 and added just the length part of a FBA as there was plenty of width for me.  I used the seam across the bust to add a total 3cm in length.  Seems to have worked pretty well.  Necklines too close to the neck aren’t usually my thing, I feel like I’m being strangled!  Scoop and v-necks are more my look, but this works.  The keyhole opening gives interest to the front (no mono-boob) and there’s enough room at the neck not to feel choked. 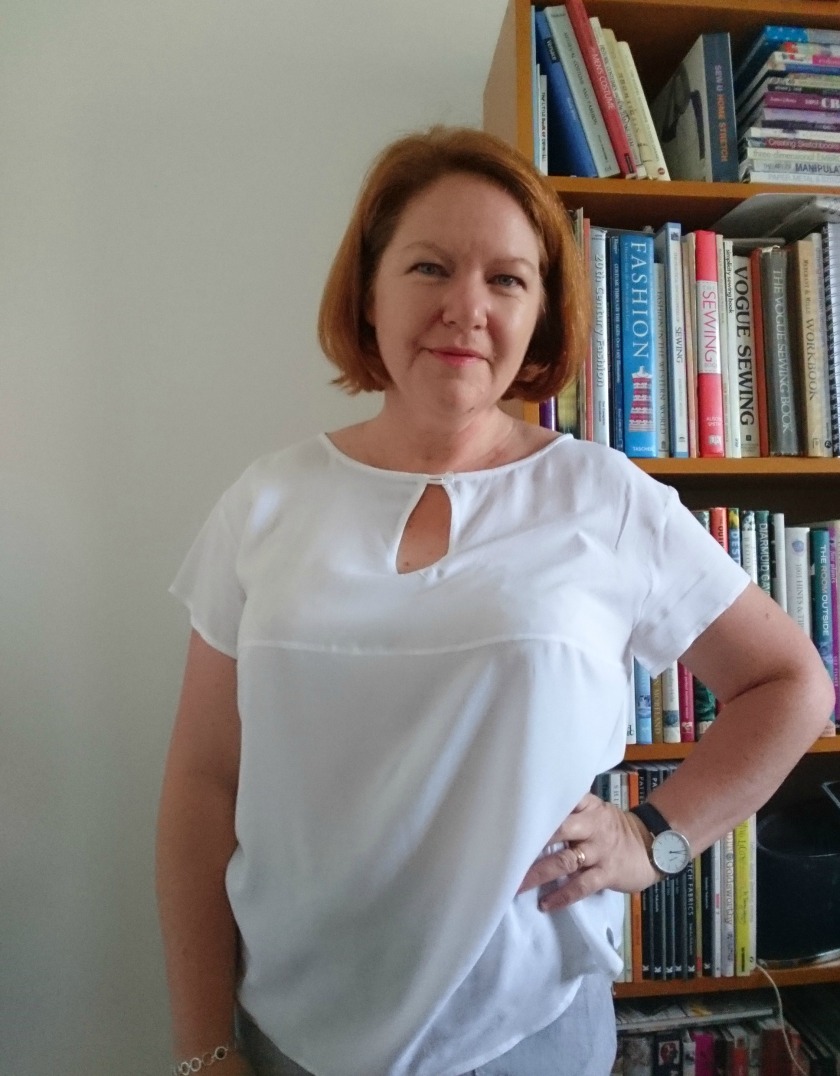 French seams and double turned hems keep the insides all neat and tidy and the bias edges are lovely for the neckline.  I’ve worn this top at least one a week since making it, pretty much as soon as it’s clean and ironed, I’m wearing it again!  I think I need more white viscose voile tops!  The button is a vintage glass find from a local antique shop, so pretty!

I think it’s a good pattern for mixing and matching too, using scraps and odd ends of fabrics.  Just to test that theory I made another from stashed fabrics.  This top started with a piece of devine blue silk satin bought from Rosenberg and Son years and years ago (it was one of those you have to get, despite not having any idea when you’ll use it).  It was narrow and I’d cut bits out of the one end to use in a blouse about 5 years ago.  funny, that exact fabric is what I’m using in this top!  That blouse was the thinnest silk satin devore and it holied up pretty quickly.  But, as usual, I hadn’t thrown it out. 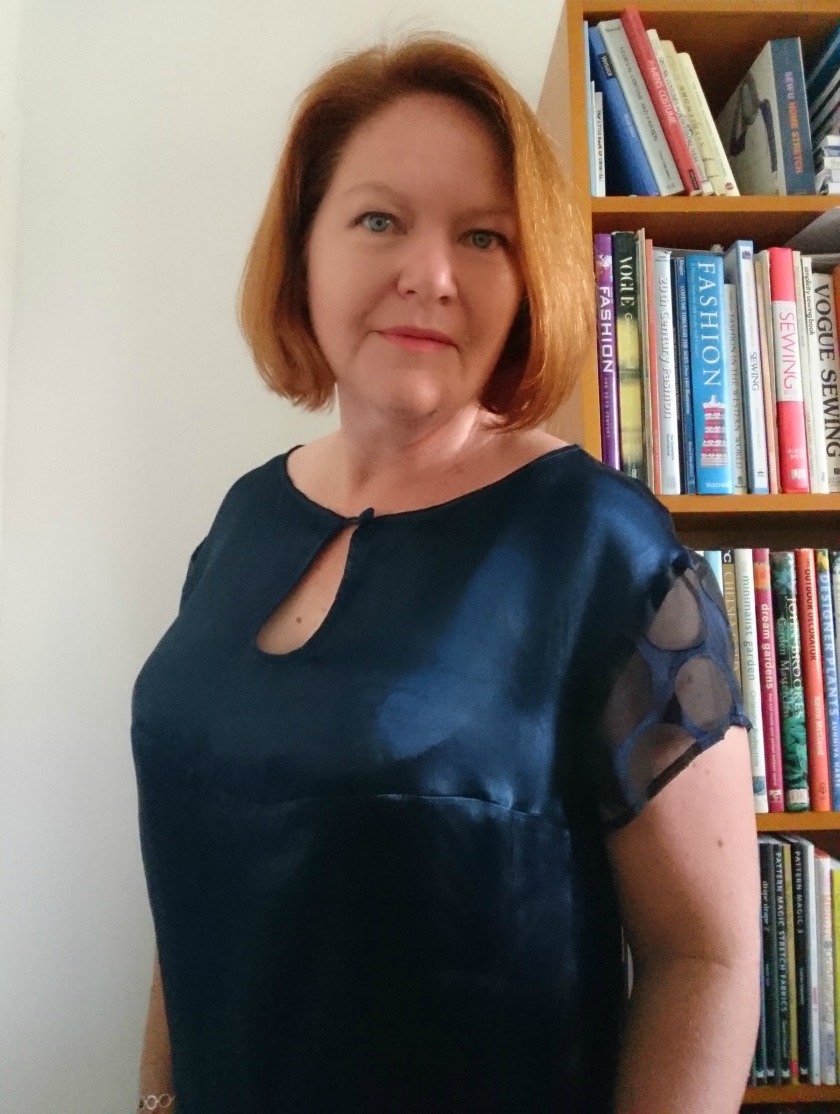 My new top would combine fabrics again, but with the plain silk satin as the dominant fabric.  The back yoke and sleeves were cut from the larger areas of the original top and the blue fabric made up the rest.  It’s beautiful!!  The satin is heavier and drapier than the viscose voile, which has the effect of pulling down more – making that keyhole opening lower..  it’s fine while standing and walking, but when sitting, it’s a little too low.  Either I live with it or I do something about it, but I’m not sure what without totally ruining the look.

French seams were not on the table this time round, the silk was too thick and would have left bulky evidence on the right side, so the overlocker was drafted in.  Hems aren’t double turned either, this stuff is slippery as all heck and a nightmare to turn on a tight curve!  Thankfully the bias behaved itself.  I really like this pattern, why did it take me two years to get round to making it up after marking it as interesting?? 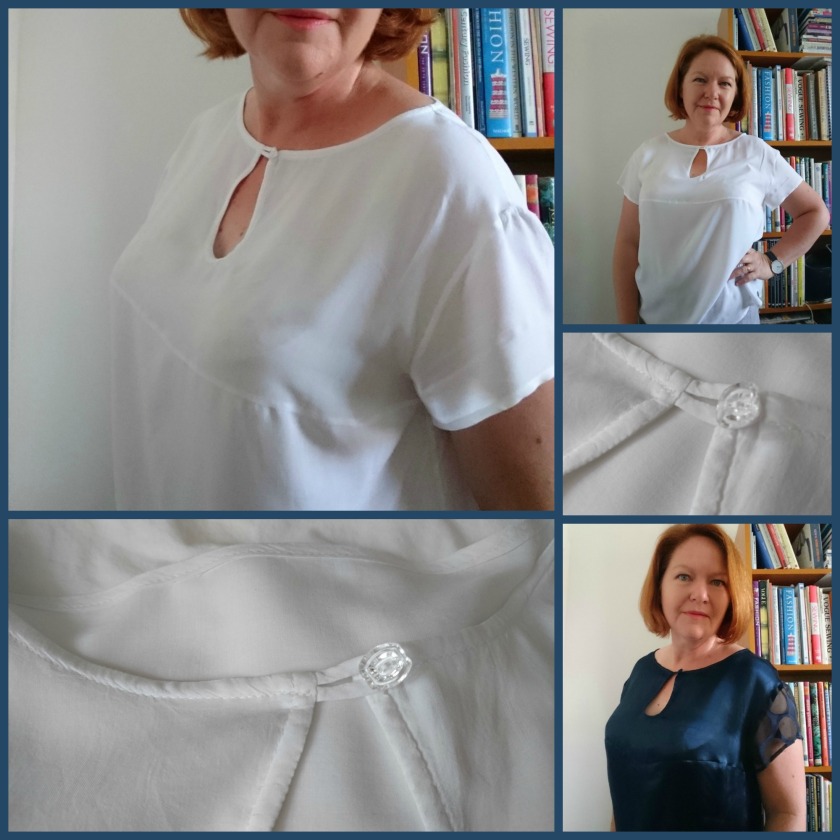 I’m definitely going to be making more, it’s a pattern that could be useful for using up all sorts of smaller pieces of fabrics, and for playing with bias yokes – thinking stripes here.  I might even change the sleeve to a three quarter length and have some for my winter wardrobe, it’s about time to start thinking of warmer clothes now, like it or not.  And coats!!