I have another dress in my winter wardrobe!  I finally got round to making my second Assembly Line V-Neck Dress, in that lovely rusty windowpane wool I bought at the end of the summer.  This takes my winter dress total to 3!  Woohoo!

I made a couple of adjustments to the pattern this time.  I stayed with the size I made the first time, the large, which fits well enough and I like the feel.  The first change made was to narrow the shoulders.  I took the shoulder line in by 1cm and gradually shaped the armhole line back to the original line by about halfway down.  The fit across the shoulder is much better now, so that’s an alteration that’s staying.

Now, the first dress I made with this pattern, fabulous as it is, has a small problem.  Although other people have told me over and over again that it’s fine, I still feel akward abaout it.  It’s the depth of the V.  I keep pulling the dress back so the v isn’t so low, or, now that it’s chilly, I wear a jersey vest top underneath.  This just keeps me from feeling that it’s too low and I’m showing a little too much. 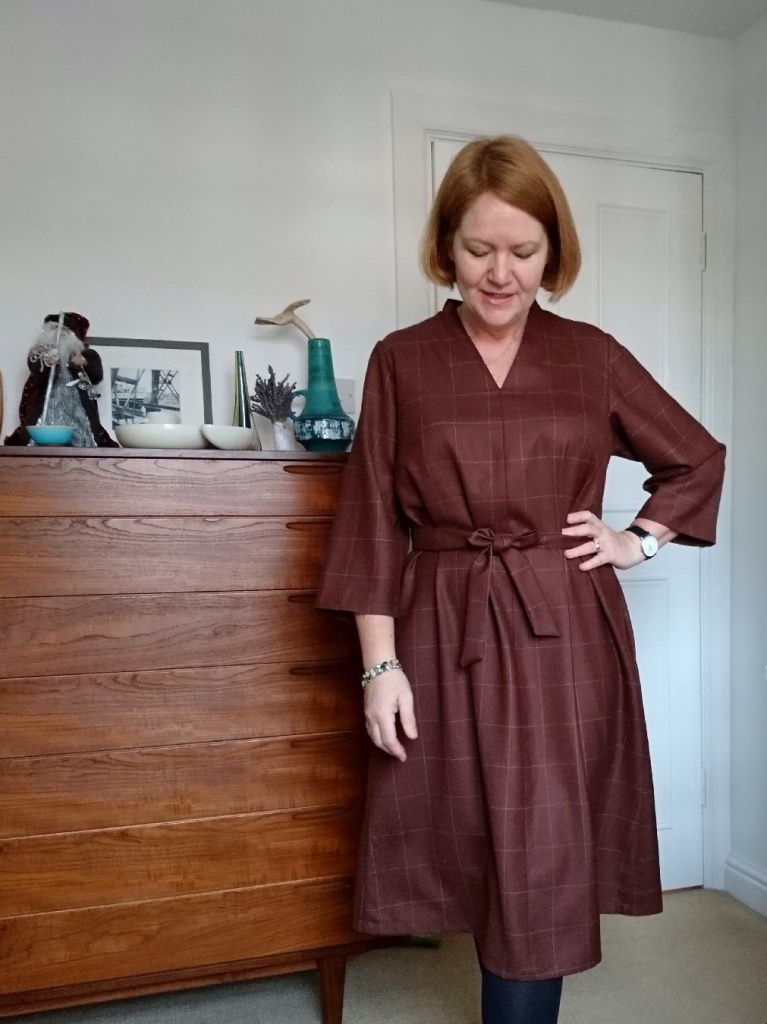 Sooo, I decided this time to lift the V by 5cm.  I traced the existing neckline, and taped paper to the front to extend the centre front line up by the 5cm.  Then I just taped the traced line so that that front point lined up and tilted the new line until it lined up with the existing line at around the shoulder point.  A bit of truing to make the line nice and smooth and it was all done.  Then I traced that and made a new facing.  I’m much happier with this new line and height of the V, it still has the shape intended, but leaves me feeling more comfortable wearing it.

Now for the fabric!  I bought it from a little shop in Kenilworth, Karen Delahunty Sewing & Knitting Centre.  It’s a lovely, soft, draping wool, and is very comfortable to wear.  I am glad I’d bought 3m originally, because with the shapes and length of the dress pieces – and trying to line up the pattern, you need almost all of that!  There’s very little left.  As it was keen to fray, I overlocked everything before starting to sew.  Now, as for the instructions, they’re dead easy to follow, plenty of images for those who prefer pictures to words!  You end up with a very neat inseam pocket too, which is always nice. 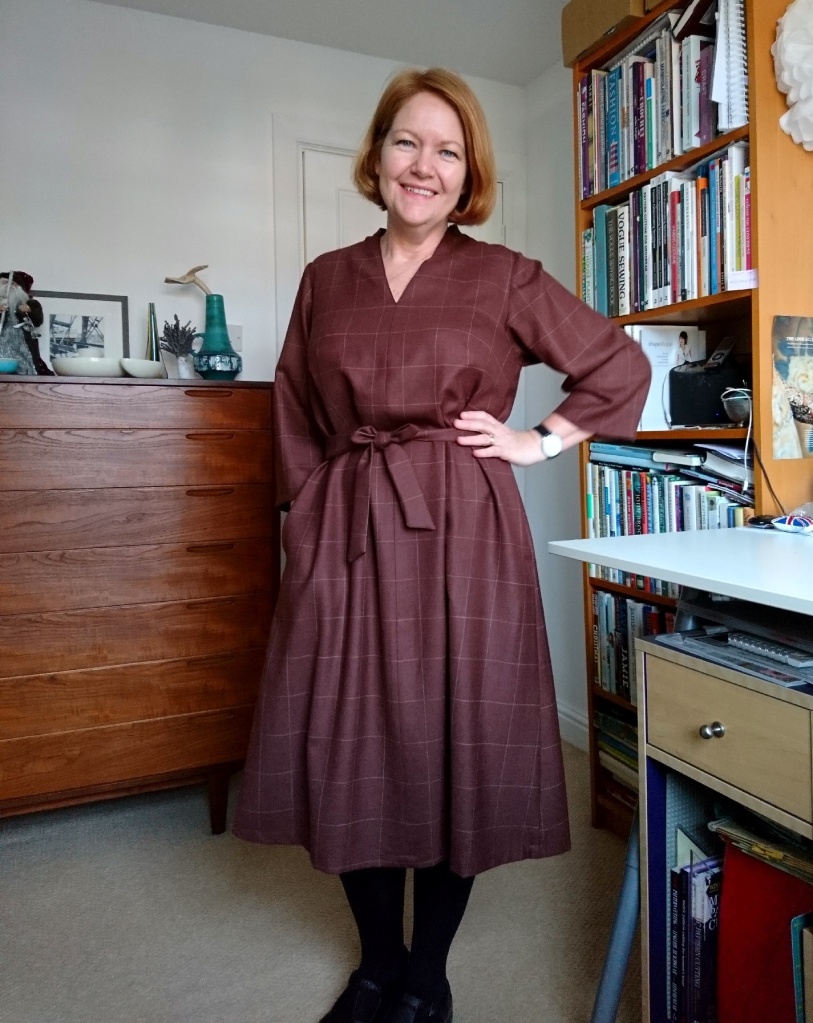 So, I’m happy with my new dress, I just need to figure out a good colour of tights to wear with it.  Initially I thought grey would be good, but now, seeing these photos with the black tights, I’m thinking navy….  And I need better shoes!

Ok, I know you’re waiting to see my coat, but I have something more fun! I made another dress!! I know what the other half is going to say when he sees it. He’s going to make a “nun outfit” reference, Sound of Music costume…. But I really don’t care, as an addition to my wardrobe with the Tea House Dress, it’s going to be well worn this season!

I made D:106, The V-Neck Dress from The Assembly Line. The fabric is a navy fine wool suiting that I bought specifically for this project from Fabworks Online. It’s soft and drapey and has the most wonderful sheen on it, as well as a fine pattern of lines in the weave that make it interesting close up.

This is the kind of wool I really like, because I shove it in the washing machine on a woolens wash and then hang it up to dry. Unless I completely forget that it’s in the wash and put it in a normal load, it’ll be washed on that woolen cycle for the rest of its life, and it won’t shrink! It also saves me a load of dry cleaning bills!

I detailed the toile in my previous post, but if you haven’t read that yet (whaaat??) here’s a round up. I traced the Large and made it up, looking for areas to fix. The only thing that stood out was the length, my legs aren’t supermodel length, so I took 4cm out of the skirt length, decided to go without a FBA and went for it! 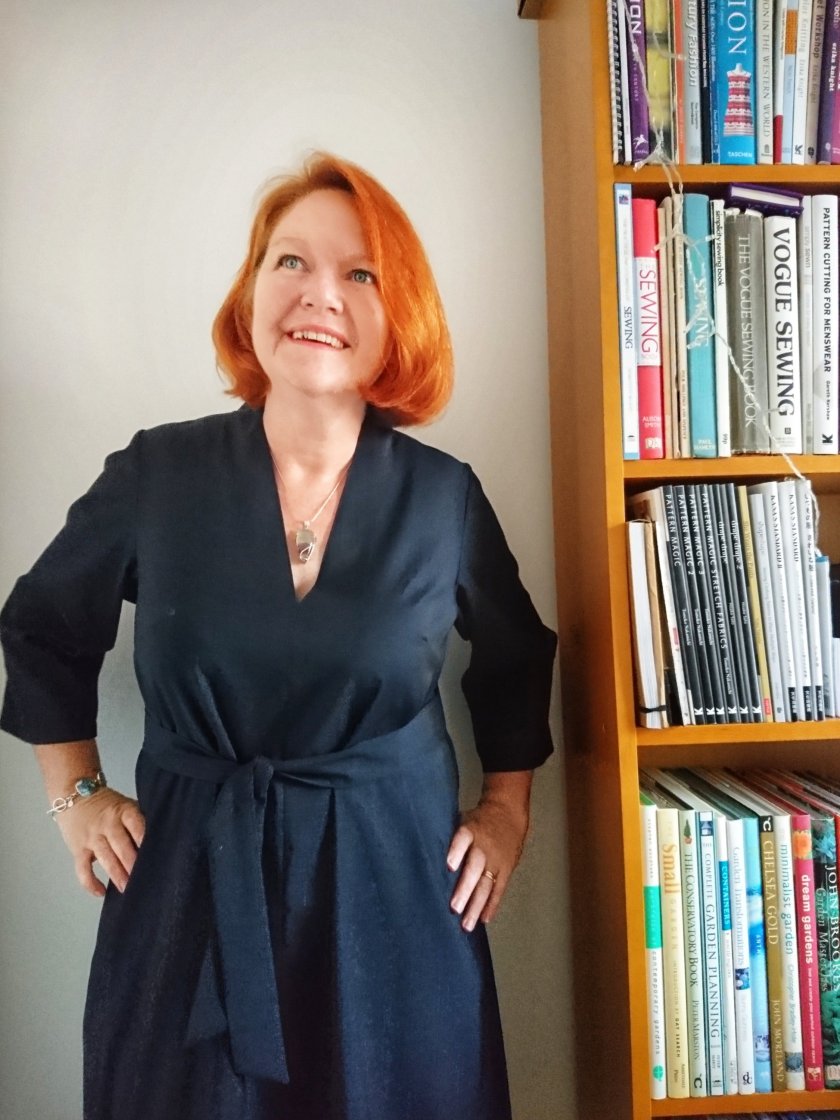 The pattern pieces are rather long, but as the skirt isn’t massively flared you can actually get them staggered next to each other for cutting out, if your fabric is a suitably wide 140cm or above. I bought 3m just in case, and ended up using about 2.2m. That means enough for a skirt or cropped pair of trousers with the rest, free clothes!! 🙂 The instructions are very clear, good illustrations to follow if you’re a beginner or not too confident. The inseam pocket instructions are great and are the way I do mine normally. The result is a neat, hidden pocket. I used Gill Arnold’s fine sheer fusible for interfacing the collar facing, the belt and to stabilise the pocket seam areas.

The dress goes together easily if you follow those instructions, the only thing I felt was necessary that they don’t mention is to stabilise that v-neck while you’re working with the pieces to stop it stretching out. I ran a line of staystitching from the top down within the 1cm seam allowance, just to be safe. Another thing that beginners will like is that the instructions include where, and when to finish the seam allowances. They say to overlock, but you could just zigzag. I wouldn’t use French Seams unless you were using a really fine fabric because the resulting stiffness will affect the shape of the skirt.

I was initially worried that the V would be too low, I’m not necessarily comfy with showing off cleavage. But, I think at some point I need to stop being so prudish! A friend who saw the dress said it was fine, she didn’t see any underwear (one thing I don’t like showing) and that the depth worked. So there you go, it works and I’ll get on with it! It’s great for showing off a pretty pendant!

I’m really happy with the dress, I love the sleeves and the length, and that I can adjust the belt to be comfy. I definitely won’t be wearing the dress without the belt!! But I’m thinking of adding thread belt loops to hold it in place, as it tends to move up and down a bit. I also probably should have made the belt a little longer…. Nevermind, it’s ok for this time! Now I hope to influence the girls to each have a version, I think it will look fantastic on Daughter No 2 with her height, and nice and dramatic on Daughter No 1, especially if worn with one for her many new jackets! 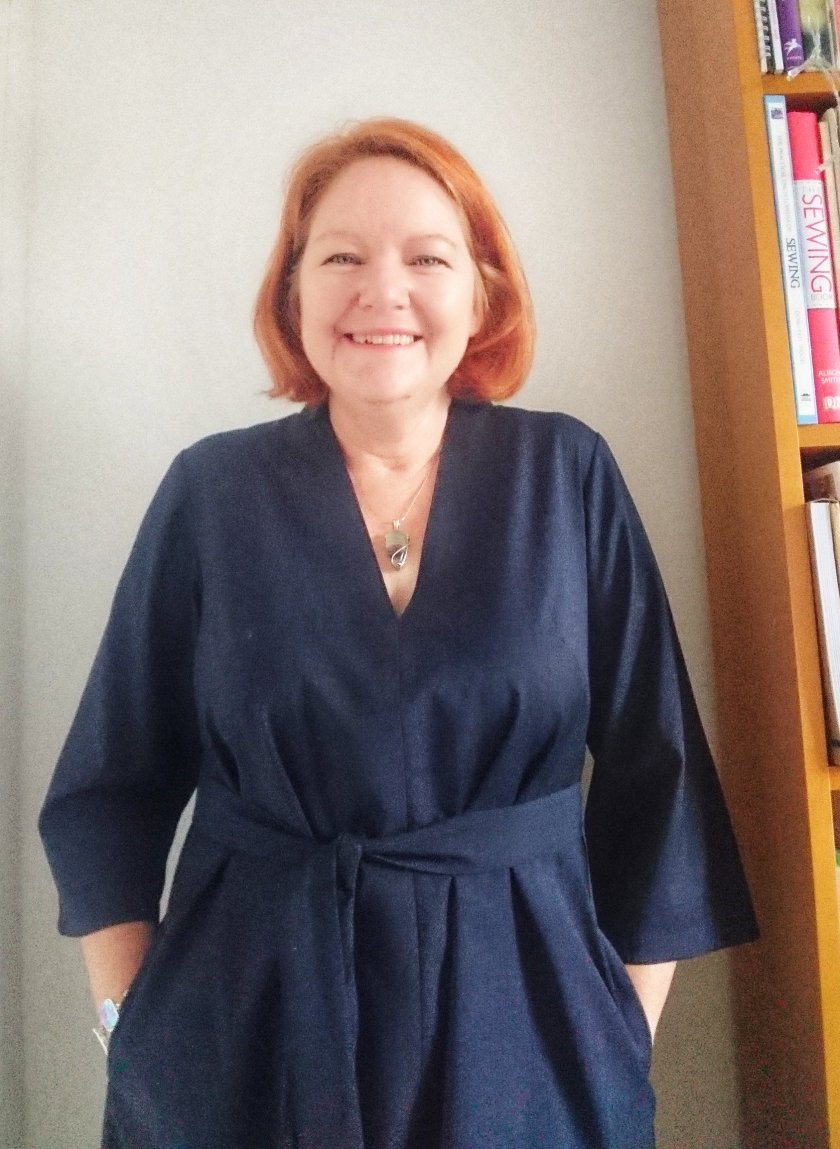 My dress has been shortlisted as a finalist in the “Around the World” section of The Monthly Stitch Indie Pattern Month 2018.  Here’s the link to the voting page, I’d be delighted if you decided to vote for me, but you also get to choose 2 other garments to vote for.  You can only vote once, but you get three choices.

So much has been going on this week! I finished my coat on Sunday, I have some photos to edit and the post to finish before you can see it all, but it’s so nice and warm!  It’s just what I needed.

One of the projects I really want to finish this month is Hubby’s coat.  The main pattern pieces were drafted last November, adjustments made and pattern altered.  But we were no nearer finding the right sort of lining, so the whole thing stalled.  I think I have finally persuaded the other half to accept a plain lining, with a patterned piping strip and other internal details for this version.  I can make another coat, or even a jacket (one day) when we find and buy that elusive “perfect lining”.

The pieces of pattern that still needed to be sorted were the linings, front and back facings and pocket pieces for both the internal pocket and the welt pocket at the waist.  Somehow I’d only drawn up the pieces for the chest welt pocket.  So now everything is ready, no excuses!  Except that we still have no lining…

For now.  I have ordered samples of The Lining Company’s shot twill lining that have already arrived (one day service, I love it!).  The linings are plain as in they have no pattern, but at least with the two tone colours there’s interest.  I found some leftover silk in the silk box that would work perfectly for the contrast piping and other bits on the inside of the coat, and will work with 4 of the 5 samples I’ve ordered.   I also ordered a stripe lining sample from Fabric Godmother that’s still to arrive.  It should also work with 4 of the linings, if not all, should Hubby decide he doesn’t like the silk I’ve looked out.

I’m reluctant to cut the wool until I know I have everything I need, so while I wait for that last sample and we agree on colours and patterns, I have time to make something else!  Not one to sit on my laurels, I decided I’d run up a toile of The Assembly Line’s new pattern, the V-Neck Dress.  I liked the look of the dress the minute I saw it on IG at the launch.

I thought it would be perfect for Indie Pattern Month over on The Monthly Stitch.  It hadn’t arrived in time for me to make for Week 1, dresses, but I figured I’d be able to squeeze it in by the time Week 3 came around.  This week is  “Around the World”,which means you have to make a pattern form a designer from a different country to that in which you live.  The Assembly Line are Swedish, so that’s perfect!

The pattern is multi-sized and I decided to go with the Large, based on measurements and finished garment measurements.  Technically I should have done an FBA, on that size, but the measurements gave me enough width/ease to be comfortable.  I didn’t want it too big.  The toile went perfectly, I only did the main pieces.  I realised the skirt was a little too long, so I took 4cm out of the length.  The depth of the V bothered me a bit, I don’t usually go for something this low, but I told myself I was being a fuddy duddy – get on with it!!  And the bust seemed fine, there were no drag lines and there was definitely enough ease.  Done!!

The dress is actually made now, but I’m not going to give it away just yet, I am going to enter that competition now!  See you on the other side!