I don’t blame you if you have difficulty pronouncing that!

Rochelle from Lucky Lucille has been hosting a 1940’s sewalong this month.  The vintage look has been around for a while, but not something I have really embraced for myself.  I have a large box with a number of vintage patterns (no, I haven’t counted them) and some have been sewn up for Daughter No2, who seems to be able to carry the look.  But although they have been 60’s or 70’s patterns, the look is still modern, contemporary.

Now some people have no problem pulling off a vintage look, and I mean the whole look.  Have you seen Katie’s wardrobe?  It is stunning!  And Rochelle‘s?  And Casey’s?  Now these ladies obviously lead a very different and far more elegant life than mine!  I don’t think even Daughter No2 would go that far!

So if I wanted to join the sewalong, one of my resolutions for this year, I had to think quick.  I mooched around on Pinterest and various other sites for ideas, and then Rochelle posted a link to some vintage pattern sources on Etsy.  I hit gold!  I found this on Retro Monkeys‘ site…

Cute, right?  Daughter No2 thought so too.  She even liked the ruffles down the front!  We thought this would work with jeans and smarter “bottoms” too.  I’m trying to think ahead here, she starts 6th Form in September and the dress code is “Business wear”.  I didn’t buy the pattern in the end, postage and all that.  I figured I’d be good and let someone else have the original, but in the “make do and mend” spirit of the 40’s, I was going to pattern cut this baby myself.  Luckily for me the owner of the shop had scanned in the reverse of the pattern, allowing me to see the shapes of the pattern pieces.

This was fab, as I could see from the sketch that the longer sleeve actually has two little darts at the elbow, a detail common at the time.  I could also see that the neckline is raised, and that the blouse was actually quite short.  With skirts that actually sat on or just above the waist, they could get away with a shorter blouse.

Changes I made were first, to lengthen it!  I approximated where the blouse in the sketch actually ended and pinned the paper pattern to Daughter No2.  We checked it against her low-rise jeans, and decided it left waaay too much tummy exposed!  The addition of 7cm and a change of style line at the back meant we were in business.

We raided the stash and found a fair few fabrics that would be suitable, but the green spotty cotton was begging to be made up in this pattern!  I had a matching thread in the cottons box, and found the cutest little wooden buttons in the button box.  My mum had sent the buttons last year, she knows what makes me tick!  The fabric was bought from Tatler’s in Derby last year, so thankfully it hadn’t been around too long!  We did loose the ruffles down the front, but not because we didn’t want them!  Unfortunately there was just not enough fabric for the long ruffles.  Next time maybe!

So here it is!  She cannot believe she is wearing a top made from a pattern that is essentially 69/70 years old, and it doesn’t look it at all! 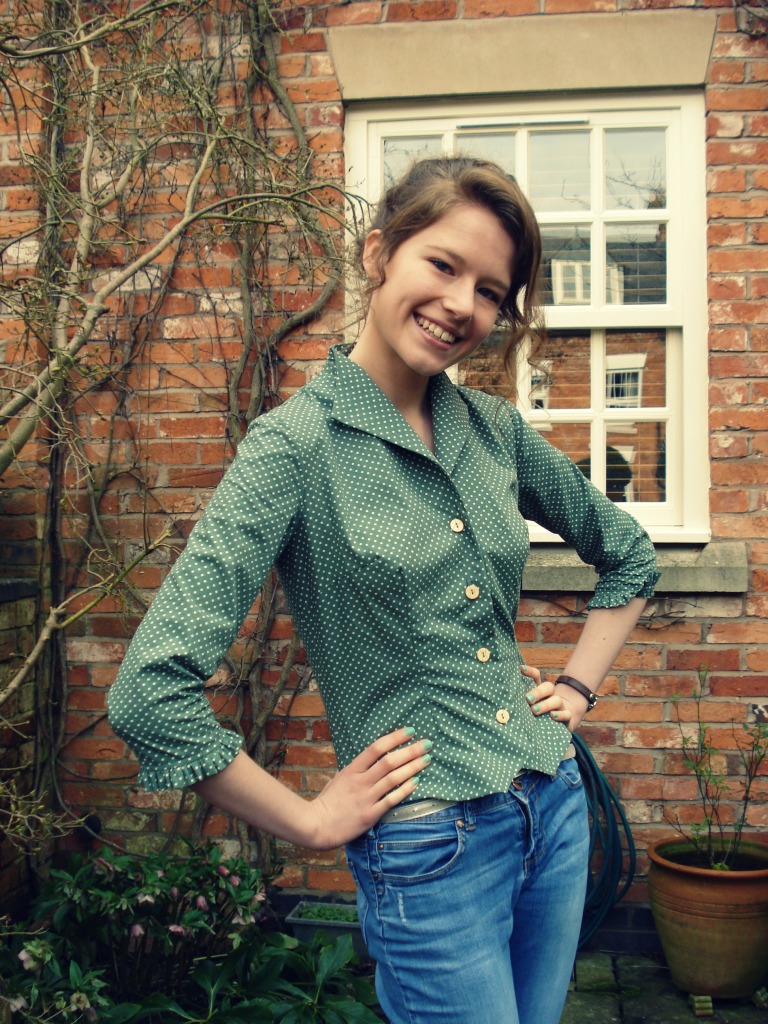 By the way, I am entering this blouse as my contribution to the polkadot February frock fest, even though it’s not a frock!  😀

Still a little bit of tummy showing, but these are the lowest cut jeans, so with her smart trousers and pencil skirts it should be fine! 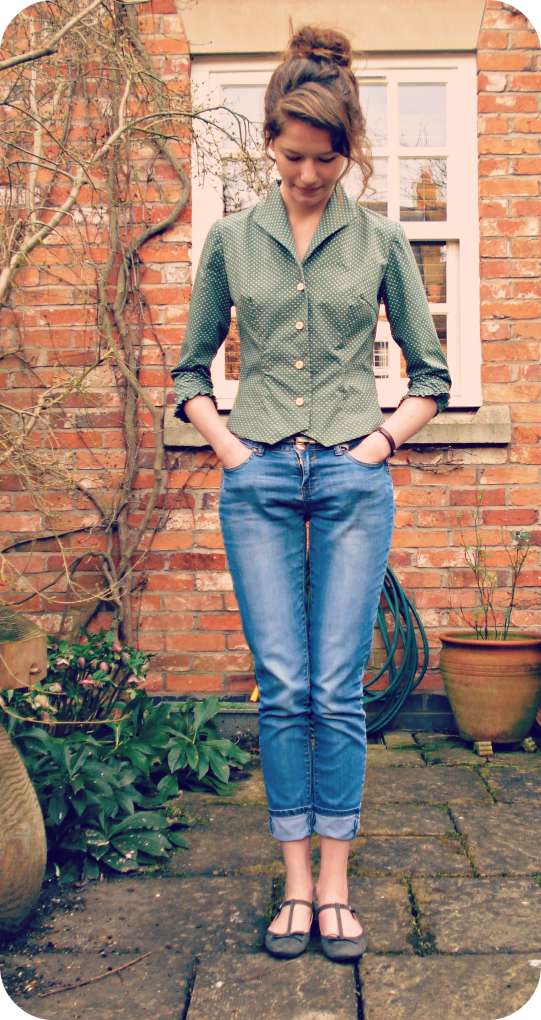 One down!  A couple more to come, I think.  I had spotted this very pretty pattern on Cynical Girl on Etsy…

How cool is that collar?  And those sleeves and the double dart tucks??  I’m going to start the pattern for this tomorrow!  How is everyone else doing in their “Sewing for Victory”?