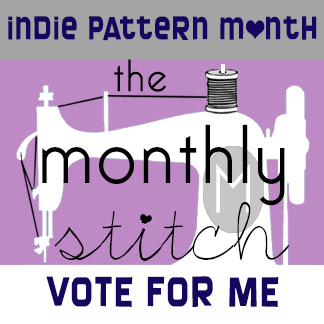 It’s been a busy week and a bit.  There’s been a lot of sewing and cutting and a little bit of hair pulling thrown in for good measure!  The highlight of this week is definitely the news that I won the Sewing Indie Month’s Dressed to the Nines category!  How excited was I when I got that email?!?!?

I was sooo chuffed, so I have to say a very large thank you to all those who voted for me, and for Daughter No2’s pretty butterfly dress.  There were some fantastic entries from all over the world so it is a huge honour to have been chosen as people’s favourite out of all of them.  A massive thank you also has to go to Mari from Seamster Patterns for organising the whole party and keeping a careful eye over the proceedings.  The sponsors have been superb too, there are so many loverly prizes!!  I had thought of possibly passing a few on, spreading the love, you know.  But first I need to check that that would be allowed.

Over the weekend I also found out I’d won a prize in The Monthly Stitch’s New to Me competition.  That’s where the Carme in Liberty had been submitted, so that’s even more patterns for me! 🙂  So I definitely need to pass on a few, this community is so great I couldn’t keep all these goodies completely to myself.  So stay tuned, there might be something going on in the next week or so.

In the mean time, this is just a little bit of what I’ve been sewing up.  Last week I finally got my butt into gear and cut out the Gabriola from Sewaholic patterns.  I had initially thought to enter the Fan Girl section of The Monthly Stich’s Independent Pattern Month, then I thought I’d probably done enough for competitions lately!  But over the weekend Daughter No2 persuaded me to go for it, after all, I was going to be making it anyway.  The fabric is a pretty bird print chiffon from Croft Mill Fabric.

It was a devil to cut!  Loads of pins were required for cutting and even more for sewing!  Normally I don’t have an issue with chiffon, you take your time, breathe deeply and pin like mad.  This stuff needs GLUE!!  Anyway, things are progressing.  To go with the skirt I’m going to make the Renfrew tee.  Thank you so very much to Caroline from Croft Mill Fabric for finding me the right colour jersey to go with that bird print, and for getting it off in the post after I’d left it to the last minute to decide to have it!  🙂  I love good customer service!!

I have also made progress on my outfit for a wedding Husband and I will be attending in July.  I will go into more detail in a later post, but I’ve done the trousers in a navy cotton sateen from Fabric Godmother, it’s so beautiful!!  I lined the pockets with left overs of the Liberty used for Daughter No2’s Carme, little details!!

The spotty stuff is a slik chiffon that will become the blouse/top.  That’s it for now, I need to get cracking with stuff today.  In the mean time, here’s a look at the internal goings on in the Paris Snowball, as requested.  🙂