On a roll here!!  This time I’m using the Clean & Natural book and making the puffed sleeve pullover, pattern S.  It’s a loose fitting top with boat-neck(ish) that finishes mid hip and has a yummy, puffed sleeve.  The fullness in the sleeve is at the hem, rather than the sleeve head.  This book has a handy size table and the pattern sizes are S to LL.  I graded the LL up two sizes, going by the body measurements and the finished measurements of the top.  Remember, I don’t like too baggy…

I toiled the pattern in some remnant cotton sheeting and made the following conclusions.  I needed more ease across the bust and length of about 2-3cm.  I also wanted the top to finish at the length it was un-hemmed.  So I needed an FBA of 3cm and to lengthen the top 3cm.  The sleeves are ok, finished at the right place and weren’t tight at the hem.  On creating the dart and FBA, I rotated it all out and am left with a no-dart top, just like the original.

Fabric is newly in the stash, after being bought last year at the NEC in March/April.  To be fair, I’d sort of allocated it to this top from the beginning, I just never got round to the grading and tracing and toiling last year.  The cotton is a woven gingham check, black and white.  I thought it would look pretty good with all the linen trousers in my summer wardrobe, and now I’m thinking it might be worn in the winter with a long sleeve layering tee underneath too… 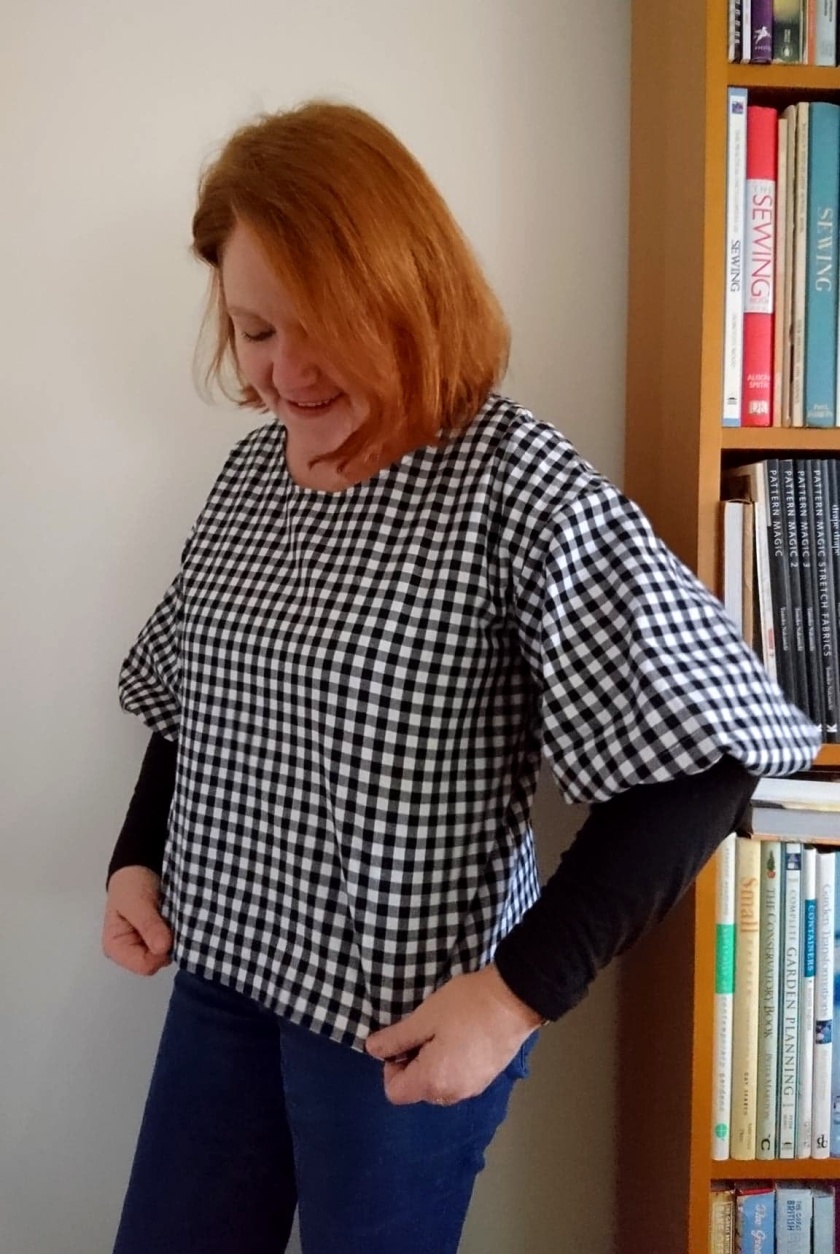 Construction is fairly straightforward, I overlocked everything first, and used ordinary seams.  The seam and hem allowances have to be added, by the way.  The facings are interfaced with fine sheer fusible.  The sleeve is pretty big, and only just fitted on the width of the fabric!  You gather the long curved of the oversleeve onto a pleated straight undersleeve.  This is what creates and holds the puff.  That’s the only time consuming part, gathering and evenly spreading all the gathers!

I had a quick try-on before hemming and decided it was too long!  I’m blaming the fabric here, the pattern.  It blinded me…  So I duly chopped off the 3cm I’d added to the length and turned up a 3cm hem.  Then I popped it back on over my head and – whoa!  I shouldn’t have done that…  I probably didn’t need to remove the whole 3cm.

I also had a problem with the neckline.  On the toile I didn’t add the facings and I was happy with where it sat.  On this garment, with facings added, it was too high!  I don’t like feeling crowded against my neck, and the other issue was all that pattern!  I think I could have done with less.  So I decided to change the shape of the neckline in the front, put the toile back on and drew a scoop to the depth I wanted and transferred that to the gingham.  I added seam allowance and chopped again.  Then I realised I didn’t have enough fabric to cut new facings.  Not going well, right?  Anyway, I cut bias strips and sewed them together and made a bias trim for the neck.  I actually like this better than the original facings anyway.

As it’s ever so slightly chilly here in the UK this week, I decided to wear it today with a long sleeve scoop neck tee, and I rather like it like this.  I think it would also look good with a rounder neck tee, or even a floppy poloneck.  I also think it needs slim fitting pants, looks good with the Birkin Flares, not so pretty with pleated, fuller trousers.  It’s the second Japanese pattern that hasn’t turned out quite the way I had imagined in my head.  I know I’m not the same shape and size, but I thought I was picking patterns that are similar to those I like in the Burdas, so I was hoping they’d come out the same too.  Guess I’ll be sticking to the trouser patterns! 😀