Hello there, is anyone still around?  I’ve been awol for a while, just not in the mood for blogging, and for a while now, not in the mood for sewing either!  I’m aware that I haven’t shown what was made in the close of last year, there are a couple of items that probably should be seen!  But this year has seen my sewing in a real funk.

January started all bright and bushy with me rescuing some table linens and I thought I’d have some fun with natural dyes and upcycle them into something more useful.  I’ve dyes a bit but not made anything – the only thing that did work out was a blue linen embroidered tablecloth that was a little holey in areas.  I managed to cut some pouches out which have worked out really well.  I used the Petal Pouch by Noodlehead and the Essential Pouch by Sotak Handmade.  As for any other sewing – it just wasn’t happening.

Then when the Russian invasion of Ukraine happened, I definitely didn’t feel like sewing!  But – I could do something else.  Those little blue linen pouches were the perfect items to sell to raise money to donate to the various organisations that were offering help.  I sold them all and some of the patchwork linen ones I’d made last year too, making a total of almost £150. 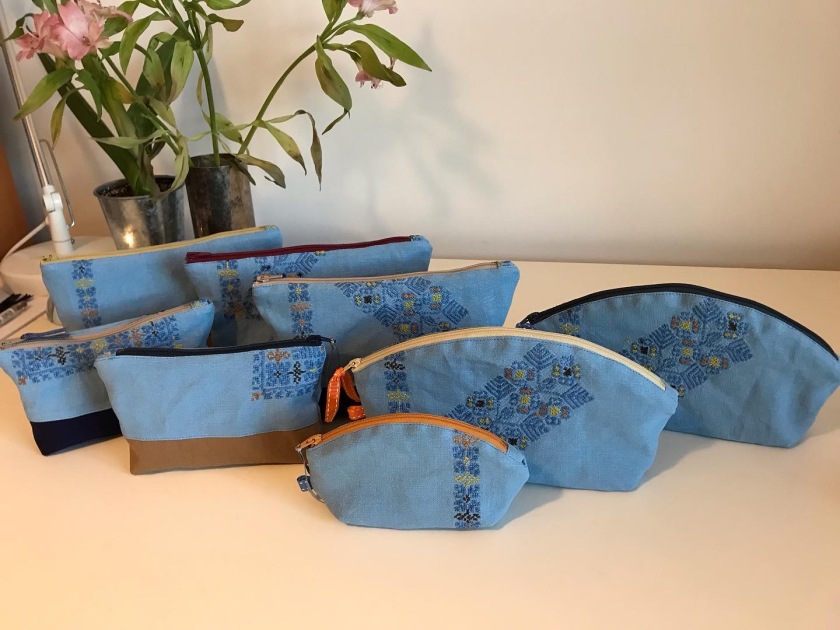 I’ve bought some digital cross stitch patterns from a couple of Ukranian based Etsy sellers which I thought I might try to do over the summer, sitting in the allotment with my feet up…  And generally not forced myself to sew if I didn’t feel like it.

Eventually I got a little inspired and printed out a pattern I’d had for a while, the Terra Pants from Pattern Fantastique.  I really like the asthetic of these and figured I could use a bit of stash fabric up and ease myself back into sewing – slowly.  The toile was made in cream curtain lining – probable not the best choice for a baggy pants pattern!!  I was unconvinced for a while until a couple of sewing friends disagreed with my assessment!

I went ahead with them in some soft dark blue denim and I’m convinced!  I really like them – but you’re going to have to wait for photos and details!  I’ve worn them once but was unable to get photos at the time, so here’s hoping the next week or so will provide the perfect opportunity.  In the mean time, I hope you’re all still out there and sewing or doing whatever makes you feel good.

17 thoughts on “Is Anyone Still Out there?”