Oh, I’ve been having fun with the coats!  This is the second of the year, and boy are there more to come!  Today is the chance of the Sienna Maker Jacket from Closet Case Patterns.  I rather liked the pattern when it first came out, but didn’t buy it immediately.  I thought about it for a while first, and when I saw the perfect fabric at Fabworks at the end of November, I knew I needed to put the two together.

I bought 3m of black windowpane wool (sold out now) and the PDF pattern and sent it off to the other half for printing.  To check for shrinkage and finish change, I cut a 10cm square of the fabric and threw it in the washing machine with some other woolies.  No shrinking and it actually felt less pricky and rough than before it went it!  So in went the three metres.  But then it sat around a while, Xmas was in the way and I wasn’t quite ready.

But move into January and I traced the pattern, toiled and made a small FBA adjustment, also increasing the length of the belt.  I only needed 2cm of length in the bust depth, the width was fine.  Now the pattern is ready, but I wanted to line at least part of the coat.  I’d chosen the longer length, view A.  The proportions are nicer than view B, and as I’m making a wool coat, it might as well keep as much of me warm and wind free as possible!  But the wool wasn’t completely itch-free so I definitely wanted something more between me and the fabric. Not to mention that any garment pushed into a wool fabric sleeve will end up bunched under my armpit – and that’s just uncomfortable!

So I decided on a half lining, with sleeves, and to bind all the remaining seams and raw edges with bias binding – Hong Kong finish.  I bought a couple of metres of mustard gold coloured polycotton from a local fabric store to use for the bias and raided the lining bag for something suitable for the half lining.  I had just enough to cut the pieces for the back and front lining from the chopped up remains of the Pepernoot Coat, but there was no way I’d get the sleeves out of that same stuff.   But I did have some striped sleeve lining….

So – now I’m ready!  I interfaced facings and upper collar with a fine sheer fusible, and the coat front T-zone, sleeve heads, across the shoulders in the back, hems, and undercollar with a weft insertion fusible.  I also made a canvas chest piece, inserted shoulder pads and bound all the seams and hem.  The stripes lined up perfectly – because I cut out one piece at a time and laid that piece right sides down on the fabric, lining up all the stripes, before cutting the second pattern piece.  I discovered that the D-rings in my stash were bought for handbag making and were far too small for the belt.  Not willing to buy anything, or to spend time waiting for an online purchase to turn up, I dug through the box of vintage belt buckles and found a black one that the belt fitted through just perfectly! 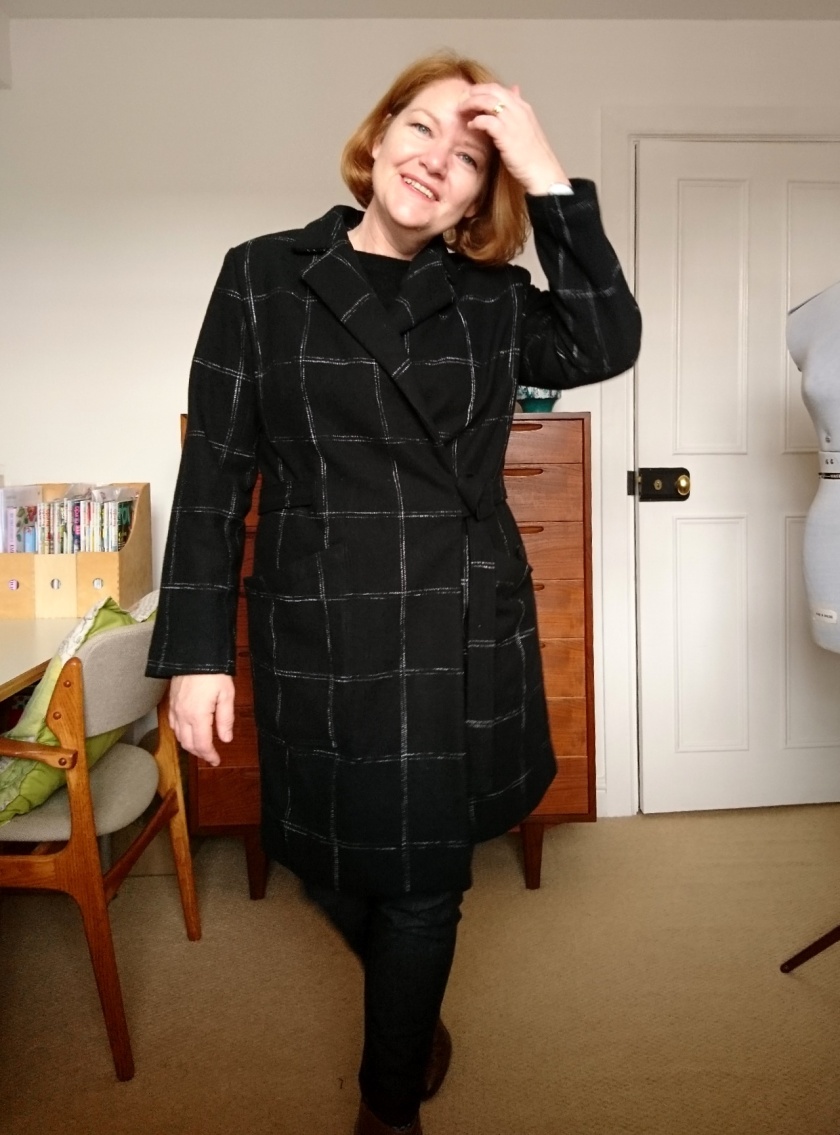 I made a couple of changes to the finished garment though.  First was to alter the side that the belt buckles on – the fronts overlap right over left, not left over right, on my coat.  I’d tried the way it was designed in the toile and it just didn’t feel right, so I switched it.  The two big pockets are enough for me so I eliminated the inside pocket and the breast pocket.   I also changed the way the hem meets the back vent and the front facing.  Although I have to admit that was a “work in progress” alteration, rather than one that was planned from the start. 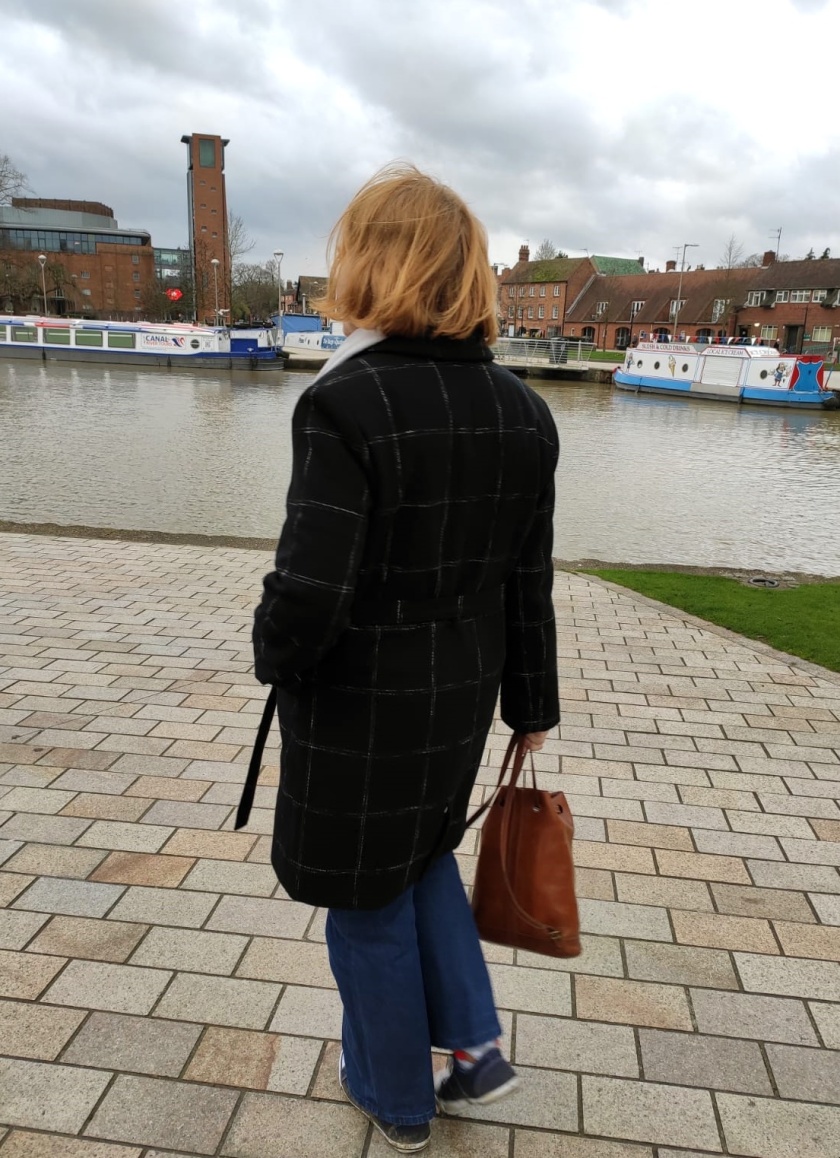 I think if you’re using a twill or similar, that the finish as described in the instructions would be just fine, but it wasn’t right for this.  So I made the hem 1cm deeper and sewed the bottom edge of the facing to that of the coat front and turned it through the usual way.  I also did not double turn the hems, but rather interfaced them so the interfacing did not stick out above the hem, and bound the edges. Similarly, at the back vent, there should have just been a fold of vent and the hem double turned.  Instead the raw edges were bound and I folded an uneven mitre in the corners, meeting the bound edges.  And it looks good!! 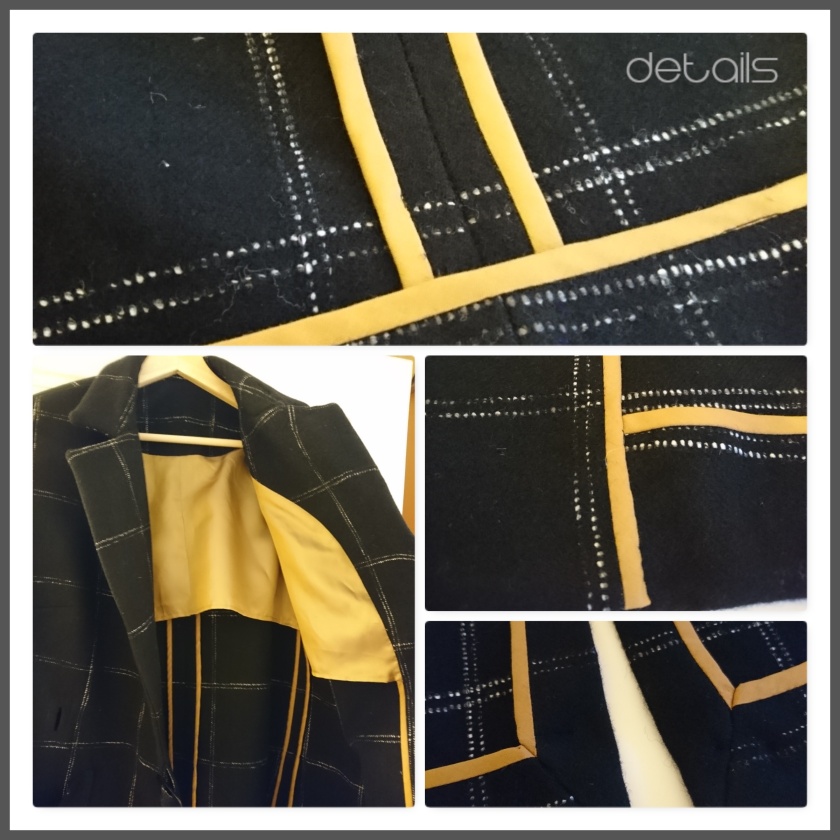 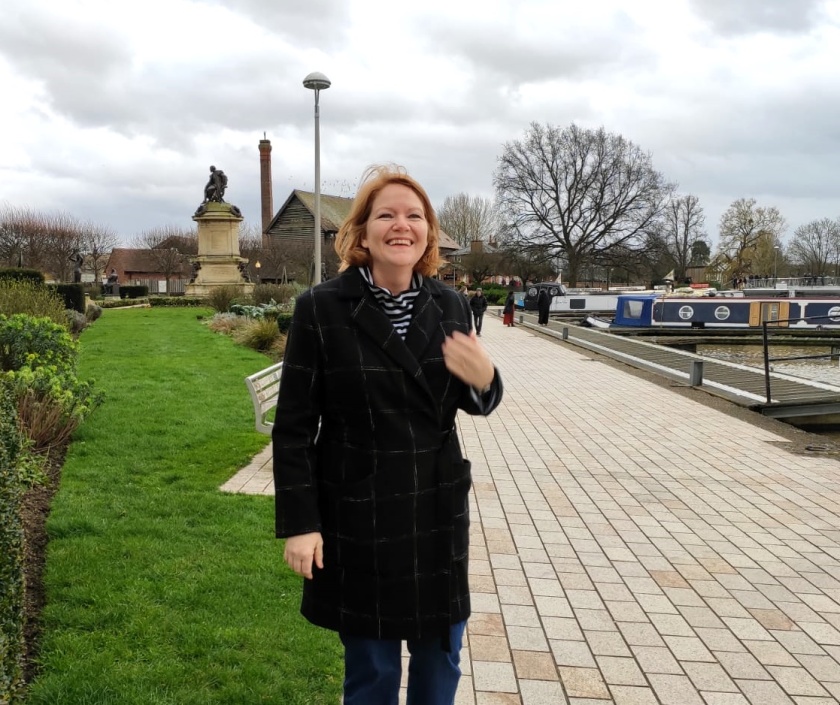 The hem was handsewn in place twice.  I used Herringbone stitch which is nice and strong.  Even if it were to get caught and snap, the rest of the stitching wouldn’t come out, so no droopy hem.  The first row was stitched about 1.5cm below the bound hem edge, and the second was along the inside edge of the binding.  I did a similar thing with the front facings, using Herringbone stitch and stitching two rows vertically through the interfacing to keep the facing attached to the front pieces and preventing them from flapping about.  This step is done on the machine in the instructions, but I didn’t want that sort of look.

The finished coat is rather yummy.  Lining has definitely made it more wearable, I love the pop of mustard against the black.  I made the size 12  based on measurements.  The pattern overall, apart from the small amount of fabric needed in the bust depth, fitted “straight of the envelope”.  The finished length is perfect, even for shorty me, and the sleeves finish in the right place too.  I think this coat will be the perfect addition to my wardrobe, and should make it into that transitional spring/autumn season rather well too.

I just have one question.  If I don’t want to wear the coat all belted up, what do I do with the belt??  It ends up looking like a tail.  I’ve tried stuffing it into a pocket, but even though they’re nice and roomy, it doesn’t work – too bulky.  Tying it back on itself and looping through the buckle the other way doesn’t look right either, it pulls the facings back and open.  It calls for experimentation I think.  Anyway, I have the shorter, view C version of this jacket traced too, I feel I might need a summer jacket.