I had a nice big collection of leftover pieces of denim from this year’s denim projects, and some I’d kept after making my Birkins.  I had an idea to make something from the proper scraps as well as the larger pieces that weren’t big enough for something on their own.  I started with all the really small pieces, thinking if I just sewed them all together to make a “piece of fabric”, then I could make something out of that. 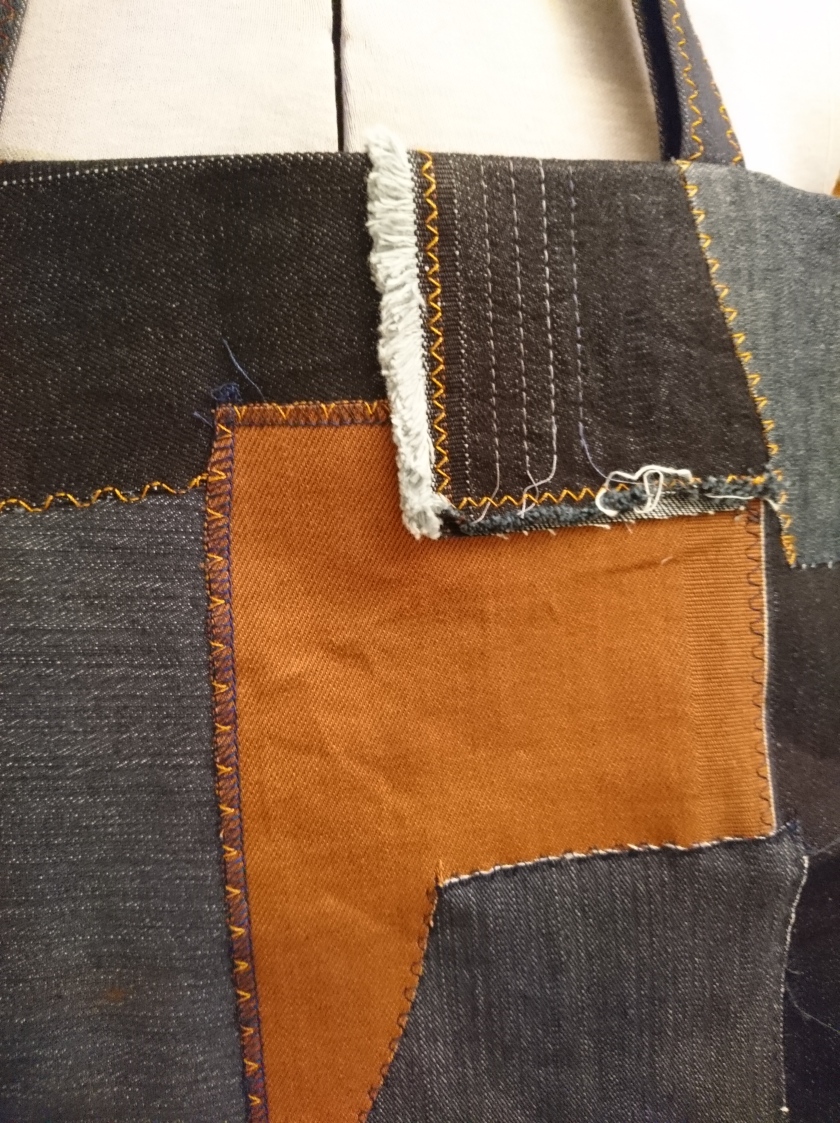 I made piles of the different colours and weights and literally just grabbed a piece, tried to see if there was another that I could fit the shape into and topstitched them together.  I used a combination of the demin thread and ordinary navy thread to give some contrast, and some stitches were just zig-zag, others were from the decorative stitches on the Bernina, which aren’t anything like the fancy stitches you get on a modern machine!

I mixed up the colours a bit, and tried not to get too caught up in making sure the fabrics were equidistant from each other.  I tried not to think too hard about it, just get sewn up, otherwise it starts to look “planned” and I wanted to try for an organic look.  That’s something that’s not easy for me!  Eventually I figured I had the right length of “fabric”, although now I think maybe I could have made it a little deeper.

But for now, I sewed the short ends together to make a tube, but without doing it the normal way, with a seam allowance.  I simply laid the ends over each other and topstitched with a few rows of fancy stitch.  Next I sewed the bottom closed, with the seam allowance on the outside.  The allowance was pressed open and I decided a width of around 10cm would be good.  I marked the sides, which would eventually be the middle of the 10cm wide side “panels” and lined those side lines up with the seam line on the bottom.  By sewing across this and making a triangle (with the baseline of 10cm), I made the “gusset” or width of the bag.   Then I folded those triangles up and topstitched them in place.  I quite like the look of everything on the outside for this bag, no hiding the construction!

But, I was worried that it might not be terribly strong, so I rifled around in the scrap bag and found two pieces of linen, green, but different greens.  There wasn’t enough of each to be full linings, so I have two colours of lining, constructed in the same way as the denim outside, but with the allowances all hidden this time.  The handles are just long straight pieces of one of the denims that had enough for me to use!  I left a 20cm gap in the base of the lining and then sewed the lining to the outer bag around the top, catching in the handles.  After a quick press I bagged it out and stitched the gap closed.  I’m rather happy with the finished bag, although I do think I should have made the fabric piece deeper, the proportions aren’t quite right.  But seriously, no train smash!!

I managed not to use any of the bigger pieces of the denim scrap for the bag, only the small scraps.  That means, of course, that I will have to find something else to use all those bigger bits for.  Maybe another shopping beg, maybe a cushion cover.  I can’t see myself making an item of clothing, I just don’t think I’d wear it, although I love the idea.  It just wouldn’t be me, and that would be a waste.

But wait, the title is for projects, and I’ve only showed you one so far!

I’ve also found a use for all the rest of the small scraps from my cutting table!  Earlier this year I started to see poufs on Instagram all made using the free pattern from Closet Case Patterns.  That lightbulb moment happened, and I started to save those little bits instead of putting them in the bin.  No more fabric going to landfill in my house!  I filled a bag, well compacted, from the Fancy Silk Store, which isn’t a small bag!  Once it was overflowing, I thought I had enough, and started to assemble my pouf.

First I needed the pattern, so I signed up to the website, which gives access to various free goodies and advice sheets.  Pattern downloaded and printed, I traced the triangular pie shapes for the top and the rectangle side pieces so I’d have more to pin on to the fabric.  I had 6 of each, so I could easily place and cut many at a time.  I decided to keep it low key and muted, so cut some leftover linen in dark green, olive green and some lime green leftover from my Teddy Designer pants made this year.  I cut four of each and sewed them together symmetrically.  I didn’t do the piping, not enough scrap for that!  The base is also a bit patchy, one piece of linen and one of a thick-ish cotton.  I’m not bothered with that, it’s the bottom, no-one’s going to see it!!  The zip wasn’t quite as long as that required, but I figure it’s long enough, and it’s from the stash.

But – I realised I’d need a bag to put the scraps into, if I ever needed to wash the linen outer pouf.  This I made from the pillowcases of a duvet set that has finally given up the ghost.  I used the bottom pattern pieces and cut 4, there’s no way I’m cutting 12 triangles from pillowcases for the inside bag!  The side is also made from bigger pieces than the original 12 rectangles, long strips from the pillowcases did the job.  I used a small zip from the stash just big enough to stuff the scraps through. 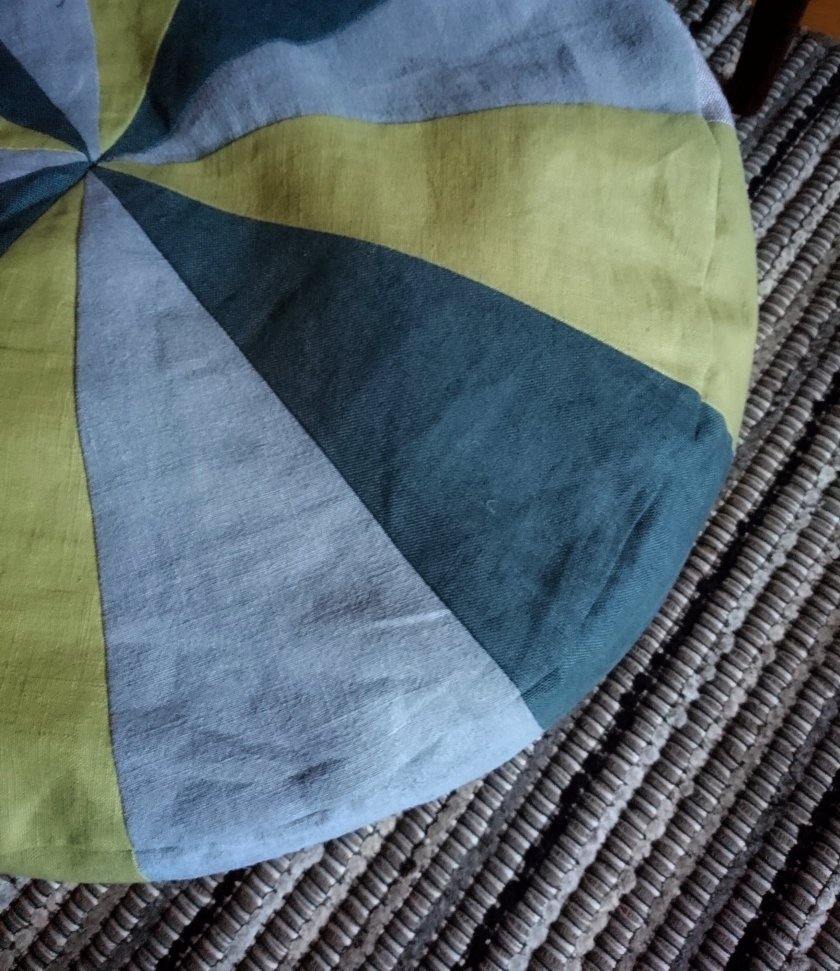 And then I realised I didn’t have enough scraps!  How??  I was sure there was enough, but nope.  So I added the stuffing of a lumpy nasty cushion, a couple of hubby’s shirts that have been cut up to make jeans pockets, and two jumpers that he’s put his elbows through and won’t let me patch, but it’s not enough.  I can’t believe I need more scrap fabric!  So I’ll just keep adding fabric as it turns up, eventually the saggy baggy elephant impression will go, and I’ll have a nice big pouf for the living room.  It’s already made itself handy as somewhere to put the laptop, Good Food magazines, and my feet!  But I don’t think I’ll be making many of these, given how much they need to fill them up!