Daughter No2 has persuaded me to make another wavy back blouse, this time using black embroiderie anglaise that we bought in South Africa earlier this year.  We bought 1.5m, which was just enough!  Because the back is cut as one piece, whole, and the flounce is huge, and also cut flat, we weren’t 100% sure it would actually fit in.  So fingers were tightly crossed…

As it was, there was a teeny tiny problem that I only discovered when I was about to attach the flounce piece to the back.  In order to get the pattern piece tertis-fitted onto the remaining bit of fabric, I’d turned the pattern piece upside down.  Yeah.  And it’s asymmetrical.  M-hmmm.  So I pulled out all the tailor’s tacks I’d put in the back piece to show me the attachment line for the flounce, turned the back piece upside down and tailor tacked again.  So we have a flounce that goes the opposite way to that intended, but thankfully it’s no train-smash, if  I hadn’t told you, you wouldn’t have known! 🙂 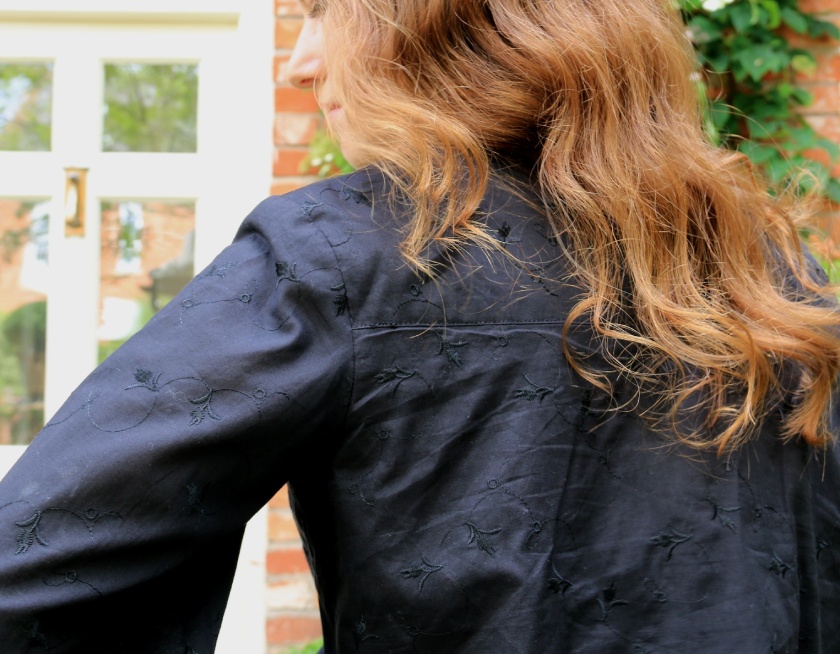 All other making-up is the same as the last time, including sewing the sleeve facing to the inside of the sleeve.  She didn’t want the piping details, so it’s not missing out on anything.  There’s a small black pop-stud about 6cm up from the base of the front placket to stop wardrobe malfunctions instead of a button to keep everything cleaner and more “minimalist”.  If broiderie anglaise can ever be called minimalist!

This is one of those tops that’ll transition nicely into an autumn wardrobe, and as long as the sleeves of your jumper are wide, no reason why you can’t make one for winter too!  But I’m not planning on making another one in a hurry, the list of other patterns is long and growing.  I have started toiling the autumn stuff, once it’s all fitted & adjustments made, I cang et started.  I’m kinda looking forward to making the warmer stuff!

In pursuit of craftyness