So, by the title, I am hoping (planning) on there being more than one post of a Japanese pattern this month.  I had a little re-think of one of the tops I posted about last time, the viscose for the Sailor Top in the Simply Sewn book.  I think it’s going to be too drapey, so I’ll be re-thinking and digging though the stash to see what else I can find for that.  I also just may have found fabric for the wide, cropped pants from Kana’s Standard.  Just need to be sure the pattern fits on the fabric!

But – I have made the first item!  Woo!  I started with the Gown/Jacket E from Kana’s Standard.  Why that one?  Because I had planned on making it last year, the fabric’s been hanging around since 2016 and it looked quick and easy. What else could you want for a sewing day on New Year’s Day??

It turned out to be very easy to make, and relatively quick.  I didn’t rush it, there is an awful lot of double turning of long hems and edges to keep it all neat and tidy.  That’s because you really do see the insides while you’re wearing it, so it’s got to be done properly.

The instructions are all in Japanese, but the diagrams are pretty clear.  Once all the pieces are traced – main body, sleeve and pocket, you need to add seam and hem allowances.  So that’s 1cm for seams and 4 for hems and edges.  The main body is one size, with an option of size 9 or 13 for the sleeve and armhole.  I went for the 13.  Now, in hindsight, I could/should probably have added 2-3cm on the fold to the centre back.  I think it would have helped to have had extra room in the back portion of the jacket.  I’ve made that note on the pattern pieces for the next time.

Order of construction is simple, make the sleeves, make the pockets, sew the pockets on at the marked placements, sew the sleeves into the armhole and hem everything.  Done! 🙂  I’d love to make this again in a soft, washed linen.  I found this shop on Etsy with lovely looking linen.  And Daughter no2 has looked accquisitorially at it already!  It used just under 3m of the double gauze I had in the stash.  It came from Organic Cotton Plus as part of a prize package.  I have a bit leftover which I think I’ll use for a kid’s outfit of some sort, there’s not enough for a grown-up! 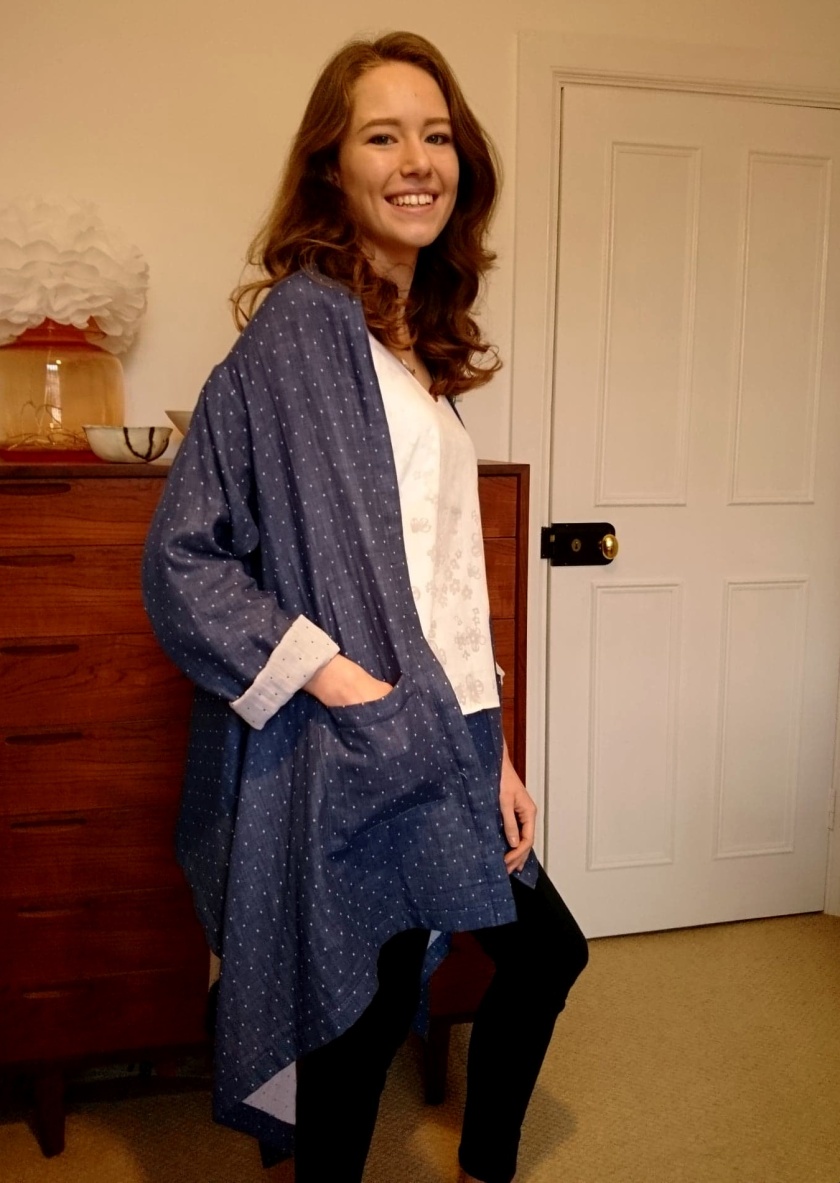 I like the look of this jacket, I had in mind for it to be a light covering in late spring and the summer, especially when sitting in my garden and the breeze gets a little nippy.  But it would also make a lovely dressing gown, and at least it has pockets for your phone and morning biscotti!  I just can’t quite get comfortable wearing it.  Because it’s basically a rectangle with armholes and sleeves, it doesn’t sit on the shoulders nicely.  I end up with it wither hangind down the back or having to haul more of it up around my neck.  If anyone else has made this, please let me know how you manage to wear it comfortably!

I thought, maybe it’s just because I’m wider than the pattern is meant for, so I tried it on Daughter No 2.  It does look better on her (in my opinion) but she has the same issue with getting it to sit and stay!  I have a feeling I’m going to need to make a couple of darts in the neck edge to give it some shape.  In a jersey or fabric that has more give, I think it would eventually form a shape over the shoulders, but this just isn’t.  And it’s such a shame, because we both love the gown/jacket.  It’s just not nice to wear!  And we both have a problem with the armhole, it feels like it’s in the wrong place, either too low or not low enough!

But I have a feeling this garment will be going home with Daughter No2, although I like it – I just don’t think it’s me… 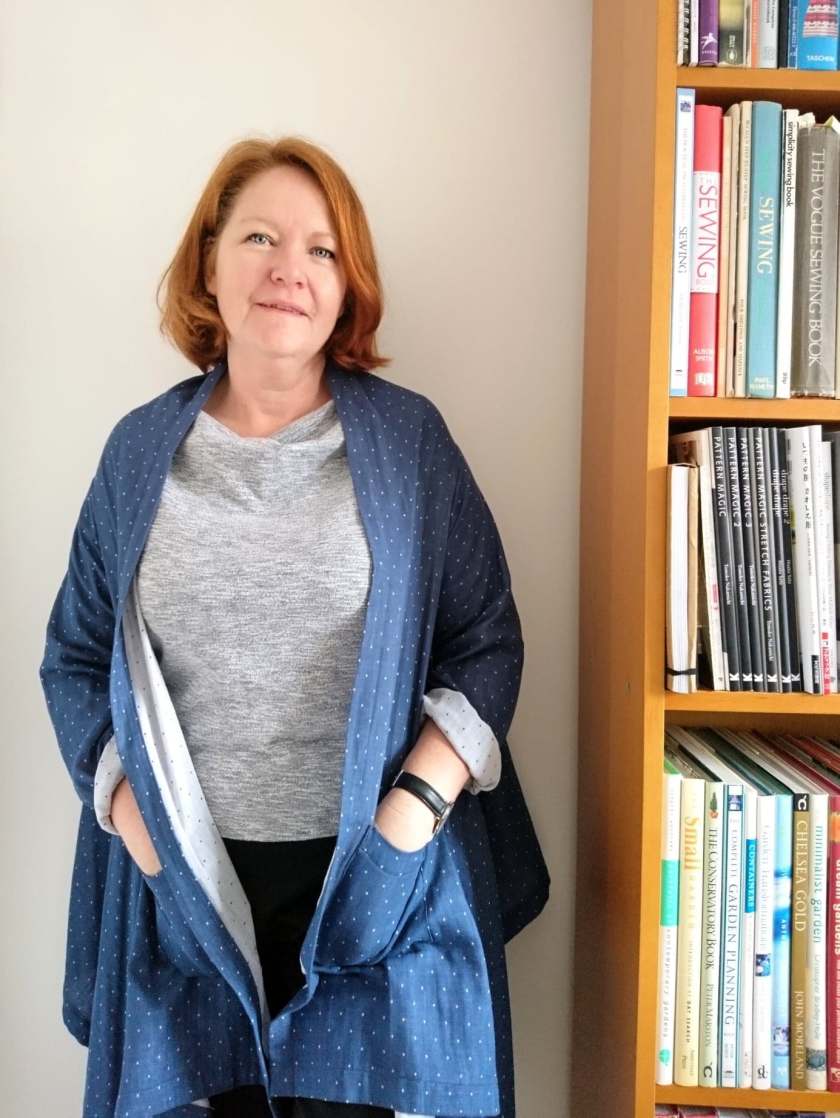