My finished #kanasstandard trousers. I really love the shape and fit of these! Might be on the lookout for a fine cord to make a winter weather worthy pair! . . #isew #handmadewardrobe #sewingblogger #sewcialist #imakemyownclothes #diyfashion

At the very end of summer, in fact, it was the end of September, I made a pair of linen pants from the first Kana’s Standard book.  I graded the pattern up two sizes and just went for it.  I really loved the finished pants, but of course, as they were made so late in the season I hardly got to wear them.  I thought it would be cool to make a pair for the winter, but thought of a nice wool suiting or a crepe.  One of the pieces of fabric I bought in October at the Stitching Show was 3m of rusty coloured corduroy.  A match made in heaven?

Inintially that cord was lined up for a jacket, and if there was any left over, I was going to make a skirt or trousers.  However – the pattern I want has yet to be drafted & I decided I wanted more trousers first.  So I grabbed the Kana’s Standard pattern and set to work.  When grading up two sizes, I also added 2cm to the leg length.  I made no other changes. 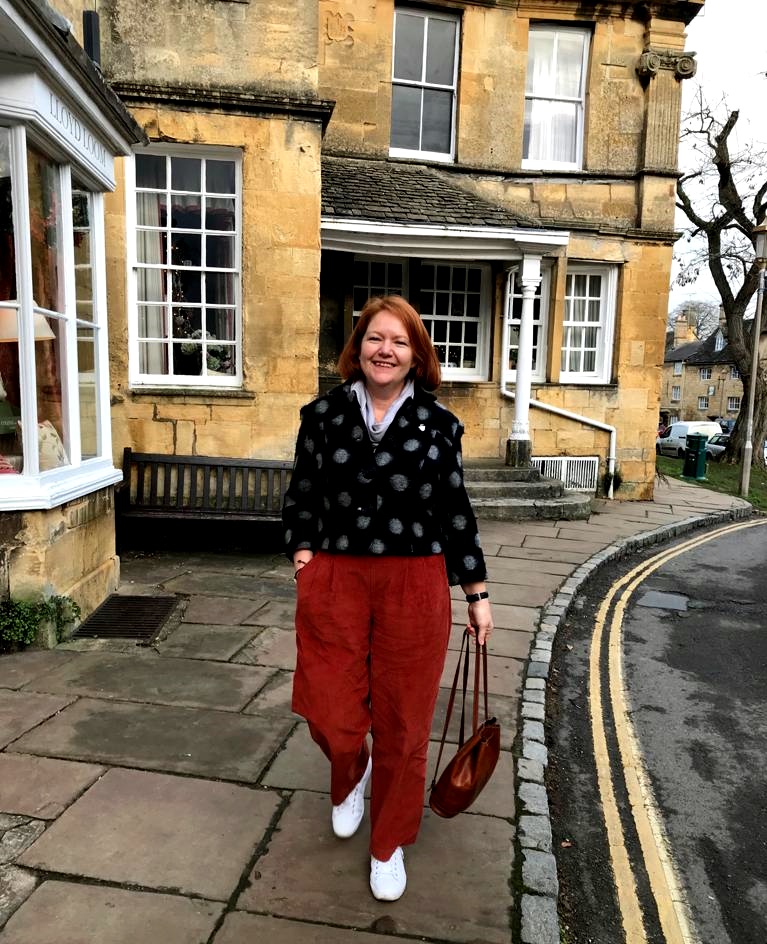 Now – in the linen, which is soft and lightweight and drapey, the width of the trouser leg is fab, but I do wonder if with the stiffer cord, that I might be able to shave a couple of centimetres off the side seams, just so they’re not quite so wide.  But I’ve been thinking that since I made them and I’m still wearing them as made!  So it can’t be that much of an issue, right?  The front pockets are the perfect size, deep enough to fit your hand in properly – and there’s a pocket in the back!  Now the pattern officially only has one, but I’m greedy, so I have two back pockets in this pair.

I love the cord, the colour is so rich!  It’s also soft and warm and nice to stroke.  Not that I advocate stroking your trousers in public too much.  Or inviting other people to stroke the same trousers – with you still in them.  I like wearing them with my Lark tees, really dark colours on top work well, as do my paler greys.  I like the look with the white trainers too, and my silver silver shoes work brilliantly, but aren’t too good in walking too far in.  They have a nasty habit of munching the back of my heels.

I wore these on Boxing Day for a little walk up and down the high street of Chipping Campden.  The daughters decided they needed fresh air and a bit of exercise, so we did the tourist thing wandering about and grabbing tea and cake in one of the numerous tea rooms.  So, my second pair of Kana’s Standard trousers, and most definitely not the last.  There have been a lot of corduroy versions of these trousers on Instagram this winter, in all the colours!

Now, despite the fact that the book is completely in Japanese, the instructions are fairly easy to follow.  In this book you have to add seam allowances once you’ve traced the pattern, and the tracing is dead easy after using Burda patterns!  The diagrams in the instruction section of the book show clearly where to add what.  The diagrams also show the order of work really simply.  So you don’t need to know Japanese!  For some stuff that’s good to know, it’s a good idea to check out this site for some translations.

I’ve used that page to make notes in the book so I know what fabric they’ve used, the sizes and amounts of fabric to buy.   There is a list of Japanese names of fabrics and their English translations here.   This page is also good to read.   But don’t let the fact that there’s no English version put you off.  The patterns are easy and quick and so nice to wear!  And yes, they have elastic in the back waist.  Secret pjs for the win!  Especially the day after Christmas feasting…

7 thoughts on “Rust as Standard”