Oh boy, what a show!  This was my first vist to a London show, I don’t usually travel this far, the NEC in Birmingham being my usual haunt.  So what puts me off going to London?  Train travel and costs for the most part, then there’s going round a very large city on my own that I don’t know – at all.  And that makes me nervous and just a little scared!  I was offered tickets to this show by Gerda from Three Eight Cake who was unable to go due to health reasons.

On the way to Ally Pally

I managed to overcome the train ticket cost by buying well in advance and only paid £14 for a return trip to London – that’s a miracle in my book!  My second problem was also easily solved – I asked Daughter No 1 if she’d like to come with me.  As she’s working in London, and is much braver than me, she was the perfect person to ask!

We had a fabulous time!  Travelling from Marylebone to Alexandra Palace was actually fairly simple, and I loved the free shuttle bus from the station right up to the front door of the show, no need to climb that long hill!  The entrance foyer was full of a display of Edward’s Menagerie little crocheted animals from Toft.  Man they were cute!!

As the place was so huge and there was so much to see, we prioritised by doing the fabric shopping first.  There were a few stands I really wanted to see, those who I’ve never seen at the NEC.  Starting at the end of the hall, we decided to move methodically up and down the aisles until we’d covered everything.  Of course, there are still stalls we didn’t see/find!  But typically, I only realised I’d missed them after we’d left.  I was going to look at everything make a note of what I liked, and then go back to buy, just what I do at the NEC.  It didn’t work!

It was very busy, very crowded and pretty hot and stuffy!  So I decided I’d just get what I liked there and then, which turned out to be the best plan.  First purchase of the day was from Rosenberg and Sons, as it always is!  They had two stands, one with their winter wools and coating fabrics and the other with everything else.  They have some amazing Italian wools and silks this year, they are just stunning, and for the price, really good value.  I was good though, and just bought two pieces of navy jersey to make a couple of long sleeved tees.  I’d noticed there is a lot of grey in my winter wardrobe, so more blue is a good thing.  Also, look a that texture on the plain blue piece, isn’t that fab?

Next I found the perfect rust coloured corduroy at Bombay Stores, for just £4/m!  So I got three metres.  Daughter No 1 loved another piece of cord, a delicious grey with a hint of green for a pair of trousers, so 2m of that went into the bag!  It’s a lovely fabric, soft and pliable with the most amazing depth of colour.

One of the shops I wanted to see was Stoff & Stil.  They’re based in Scandinavia and sell what looks like fabulous activewear fabric, so I was keen to see what they had, not wanting to trust that I’m buying the right thing online.  But they didn’t have anything like that.  It was a very good looking stand, full of pre-cut and packed lengths of jersey, French Terry and bag notions and patterns.  And although it loooked good, it was a pain in the whatsit to negotiate!  In the end I just got some fab coloured cotton yarn to make more cloths with, they were £1 each and I got 6.  Slightly disappointed that they didn’t have what I needed, but they were certainly busy and the stand was packed!

Higgs and Higgs were the next place we bought from.  They have such lovely offerings and their jerseys are to die for if you’re making for young kids.  I was really tempted to buy some of the cable jersey knit ponte, but seriously couldn’t pick a colour.  Right next to the ponte was a selection of coloured twill (denim).  Daughter No1 pulled out a bolt of pale grey/oyster that is quite soft and drapey for a twill and decided she’d love a pair of culottes or high waisted, pleated and wide legged trousers.  She then convinced me that I needed green jeans/trousers in my life.  So we bought a couple of metres of the coloured twill.

Then it was Montreux Fabric’s turn.  I was hoping they’d have more of the blue and ecru striped jersey I’d bought from them earlier in the year.  I made a Uvita Top with it and I love it!  I was in luck and snapped up more of that, and bought 2m of pale grey ribbed jersey to make something for Daughter No1 as well.

A couple of Christmas presents were also purchased, but I won’t go into that right now. And we were recognised!  We were browsing the Draper’s Daughter’s stand when one of the ladies said, “I know you! And you!”  For a second my mind went into a slight panic – I had no idea who this lady was, I’m notoriously bad with names and I couldn’t for the life of me think of where I’d met her and how I’d know her!  Then she added, “from IG, and your blog”.  OMG, thank goodness I wasn’t about to put my foot in it and say I didn’t know who she was!  Unfortunately she didn’t say who she was and it was only afterwards in discussion over tea and cake that I realised!  Jane, from Jane Makes!

We came across a stand in the craft hall while looking for Beyond Measure and Trend Patterns (who I didn’t find in the end, unfortunately).  A large beaded dog caught our attention and we were immediately sidetracked from the fabric buying mission by looking at beaded flamingoes, sheep, goats, etc, etc.  The stand was Best of African and the lady, Tracey was selling handmade animals and other items that had been made in Johannesburg by individual artists.  We have a few beaded wire items at home, everytime we go back to SA I buy more!  This time I bought (after a long chat) two gorgeous bowls in gold, white and black. I love the simplicity of the design and the colours that echo traditional African colours and those of the Zulu basketry.  I’m going to put them on the windowcill in my sewing room with cactuses in them. 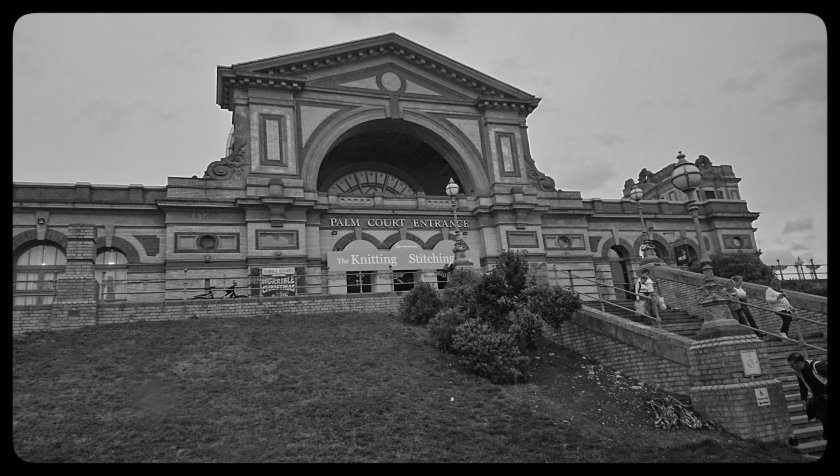 We had a fabulous day and would probably have stayed longer and gone through more halls and seen more stands if it hadn’t been so stuffy and warm. The only thing that I really didn’t like about the day was the number of stands happily offering to pack our fabric purchases into plastic carrier bags.  Only two stalls, Montreux Fabrics & Best of African offered us a paper bag for our purchases.  Come on guys, this isn’t good enough!  Luckily I’d taken a nice sturdy felt bag with good handles to put my fabrics into.  In the end we decided we’d done very well and it was time for a proper cup of tea and a bite to eat before heading out of London on our respective trains.

I am very thankful to Gerda for making the trip possible and I hope she’s getting better!  Most of the fabric has been through the washing machine and is trying to dry on this wet and windy Friday.  I’ll wait to tomorrow to get the corduroy in the wash, there’s no rush!  Now I need to find patterns to match with my new fabric and get it made before the next sewing show – no stashbuilding here!