July’s Burda magazine was pretty good, I thought.  There were a fair few patterns I marked as interesting to make, either for me or the girls.  One that stood out immediately for me to make for myself, was the cropped, slightly flared trousers, 120.  The only thing I didn’t want from the pattern was the pleated detail on the hip yoke pockets.  It had similar details to the cropped trousers I’ve made heaps of so far, the rusty linen was the last pair.

I had some turquoise washed linen I’d got from one of the stands at the NEC in March that I decided was perfect.  I had the right amount of fabric, which was a good start!  I did make a toile, as I always do with trousers, I need to know just how much length to take out of the leg, and whether or not to grade out from the hip up to the waist so I can close the zip.

In the end I removed 4 cm from the length of the main pieces in order to get the knee line to line up with my knee, I left the lower trouser piece intact.  I also graded out to what would have been a 46 at the waist, because I go straight up from the hip.  The waistband pieces are straight, which is perhaps not ideal.  I recut them so there’s a centre back seam, which helps with getting a better fit.  Although, I have to say, looking at these photos, that I could probably do with making them a little shorter, about 2cm should do the trick.  And I need to take them in a bit, they do look rather big in the thigh area, I’m sure I could loose a bit of fabric there easily.

The linen pair are great!!  I made them in the first half of July, just after we got back from our Cornish break.  The colour is almost a neutral, but has enough colour to stand above.  The linen is a bit thicker than I’d really like for the sort of summer we’ve had this year.  On the day I delivered the shirtdresses to daughter no2, I wore these trousers – that’s when I finally got those photos done.  It was easily the hottest day of the year, it got up to 32C in Birmingham, and I thought I would melt.  I’d also sat on a train for 45 minutes, then walked for another 10 in the heat.  I was already uncomfortable way before taking photos!  No matter, apart from that, they’ve been lovely.  I had to make them a little tighter where I’d let the pattern out!  The linen, of course, stretches with wear and they ended up hanging a little low, so I took 7.5mm out of the centre back and 1.5cm out of the side seams, necessitating the removal and re-insertion of the invisible zip.

Lovely enough to make another pair!  Your remember I had some inky blue linen/cupro from Fabworks a couple of months ago (probably longer than I’m thinking).  I’d expected a soft, floppy fabric, and got something with lustre and sheen (like a silk) and a lot more body.  So it went on the backest of back burners while I made something else.  But then this pattern said, “give it a try”.  The body of the fabric would hold the shape, and it’s thinner than the turquoise linen.  I had two metres, so why not!  Just a note, this particular colour has sold out, but they have other shades on a special offer…  There’s also a post with information on how to care for this particular fibre partnership.

I stuck with the original enlargement, this stuff has NO STRETCH!  It was the right call.  They fit really nicely into the waist and do not fall down during the day, just right.  Again, I left off the pleated detail, you’re really never going to see it anyway, and it’ll just make bulk under my tops.  More bulk….

So I’m really happy with this pattern, I think it could easily be made in wool for wear with boots and tights in the autumn/winter, in fact, I rather thought this last pair would be slightly transitional.  While we’ve certainly had the most amazing summer weather, just how long will it last now it’s August already?? 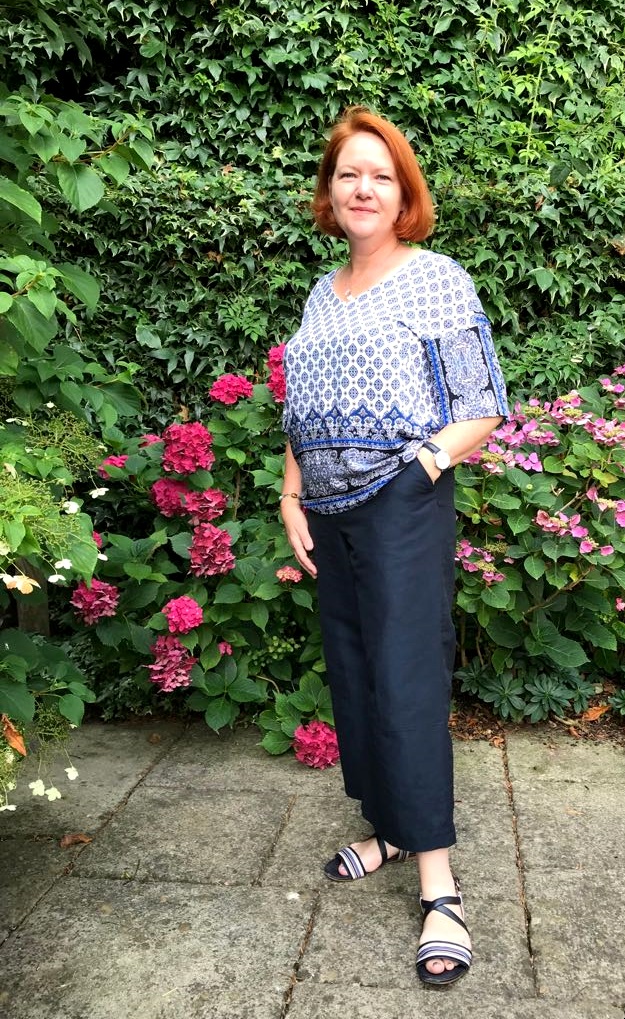 I have another pattern to make quickly from the July Burda, top 117 looks interesting, and I think I’ll make it with one of the pieces of fabric I got from Seasalt.  But I just need to finish a couple of tops on order from daughter no 2 first…