I’ve found another favourite trouser pattern to add to my list.  I liked the cropped wide trousers from the May 2017 edition immediately and dived into the stash almost straight away to find something suitable to cut up!  I went ahead and traced the 44 & 42 anyway. (44 for the waist, grading to the 42 at the hip and down)   I had an idea that a piece of grey chambray I’d bought from Croft Mill last year to make a top just might be good for this pattern. 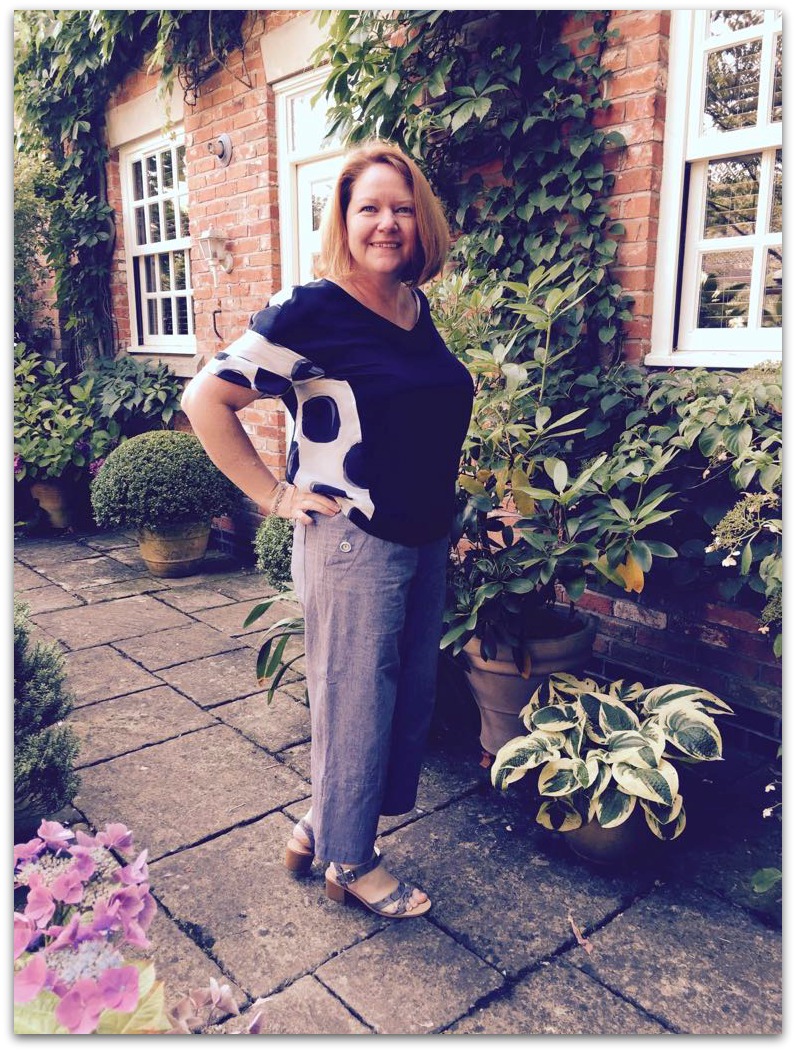 The fabric was narrow than that required, and although I had 2m, it wasn’t enough to make the trousers up as the pattern was.  The bottom part of the trouser leg is folded in half to make a deep cuff, that was the first bit to go, no double folding, just a deep hem.  Next, the easiest bit to change – the pocket linings.  I used a scrap of Liberty lawn, black and charcoal with madly bright printed flowers.

I haven’t shortened the pattern at all, and I think maybe, just maybe, I should look at removing about 4cm from the length, in the main trouser section, probably a the knee line.  I’m happy with the length while wearing them, but when I see photos I do think they could possibly look better shorter.  Especially if I’m wearing flats.  They’re almost culottes, no pleats or extra width, but wearing them feels like wearing culottes, without the extra bulk. 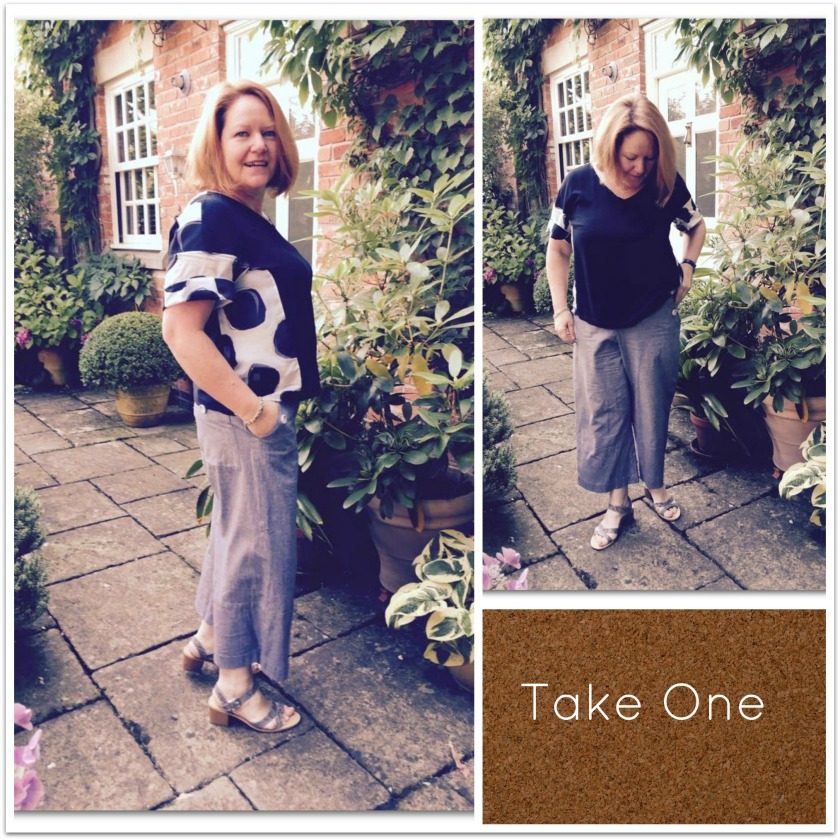 Enter version two!!  I was digging in the stash for something else entirely when I dug out a large-ish piece of lightweight black linen.  I immediately thought of the cropped trousers again, I don’t have a pair of black linen trousers yet.  This was a piece that had already been cut into, I cannot remember what else I’d made from it!  I used the pattern in the same way as the first pair, still not enough fabric to do the double cuffs.  The waistband facing is cut from white and black polka dot cotton, which is used for the pocket linings too. 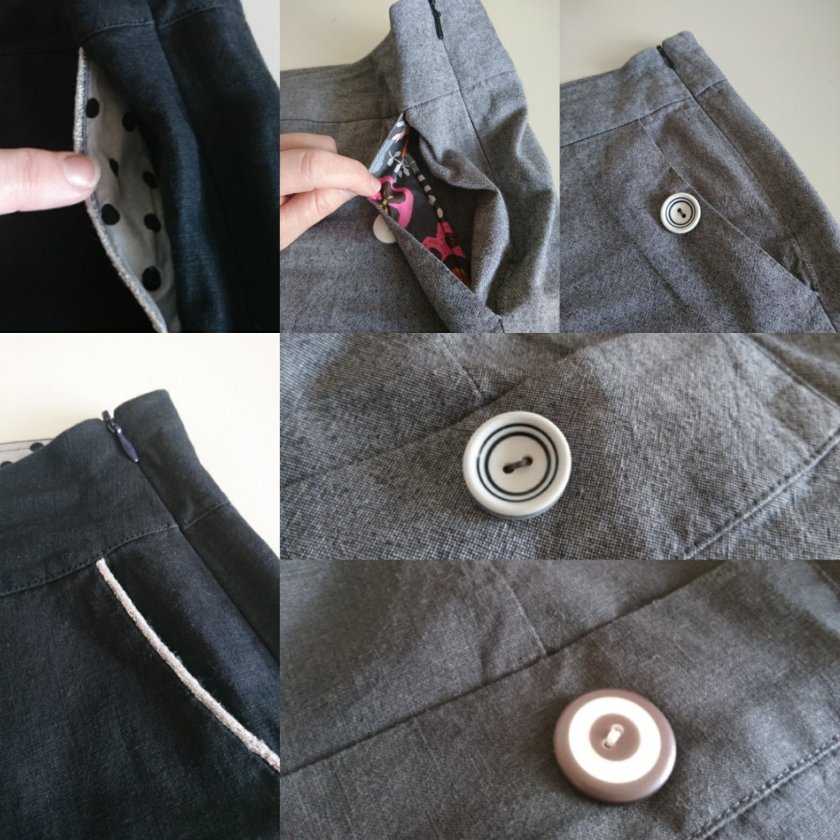 It just needed a bit of something else…  I thought there might be some silver ribbon or something in the ribbon box that could be useful and came up with a bit of silver piping instead!  It’s so cool on the edge of the pocket, but there is one drawback.  The pockets are nice and deep, the angle of entry just “gives” enough to be able to shove your hands in comfortably.  However, with the piping on a cotton tape this doesn’t really happen, not to mention the piping is not soft, the silver metallic threads are rough.  So it’s not as comfortable to shove my hands in these pockets as it is in the other pair. 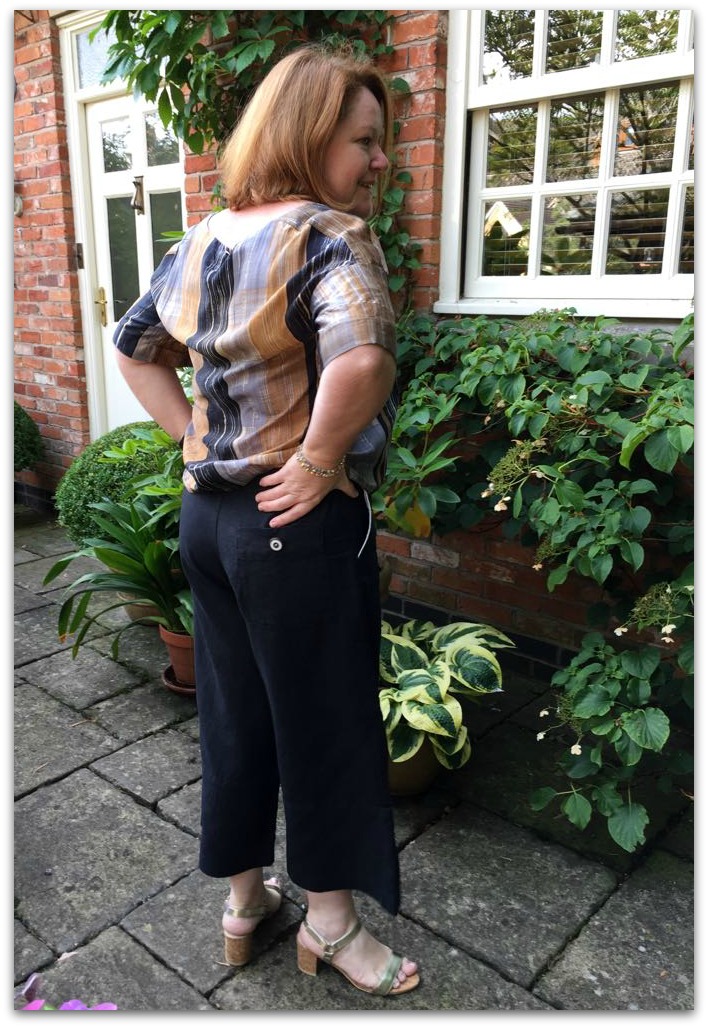 I love the back pocket, deep enough to hold my mobile phone 🙂  All buttons came from the stash, as did the zips, although I now have to replenish my stash of black invisible zips.  I have yet to make the full length version, but as it’s quite similar to others I have, I might give it a miss, enjoying the cropped versions for what’s let of our British summer (which already feels like autumn….)  I know southern Europe is struggling with the intense heatwave of the last few weeks, but I don’t think we’d mind if the Jet Stream shifted a little more north and brought us some of that heat for a little.

In the mean time, I’m working on a 1920s flapper dress in gold and black sequins for a friend to wear to a themed ball early in September, trying to get my Morgan Boyfriend jeans to fit better and find the time to run up a black linen jumpsuit before it’s too late to wear it.  See you on the other side!!! 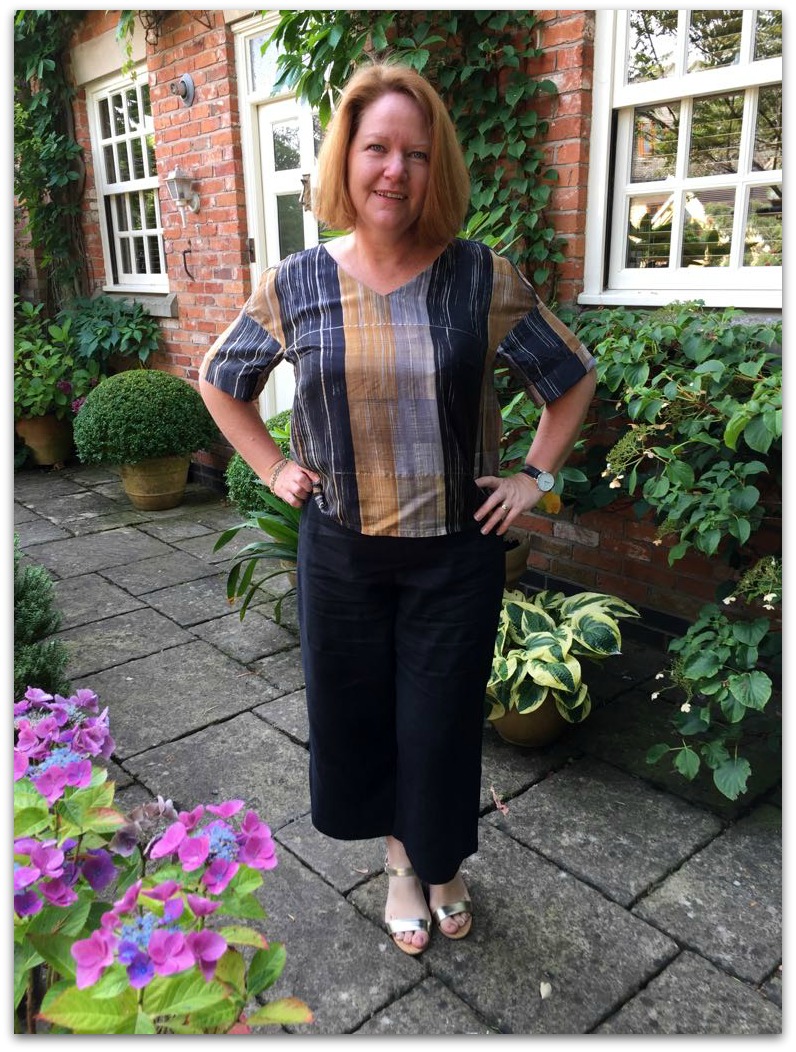