I’ve managed a little sewing between sorting out my parents, their house, business and lives in general, not to mention looking after the invalid. (That’s my new name for Mum, please, don’t tell her)  Things were going swimmingly with the double hip replacement until her x-rays before her 4 week check up when a break in her femur was discovered!  So she was whisked back into hospital immediately and underwent surgery for a third replacement!!  So we’ve had a bit of a setback and my return home has been delayed by 4 weeks.

I think the parents felt a little bad, so Dad offered to be carer for a Saturday morning, leaving me a little “me time” to get some sewing in, or whatever I fancied.  So I used the time to finish two tops I’d cut out for Mum.  This is a stashbust x2.  I brought over a really pretty Rose & Hubble rose print cotton which I thought she’d like in her favourite pattern for tops, Burdastyle top 134 from March 2004 magazine.  She had a couple of fabrics to use up too, so I picked out a navy and white mystery fibre content hibiscus print. (I’m pretty sure it’s 100% polyester, but she loves it). 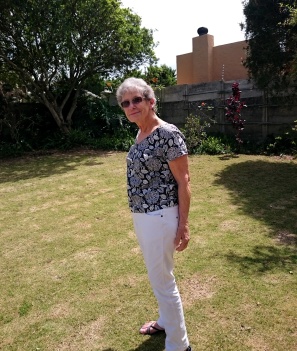 The only issue I had was with the cotton.  The print wasn’t on grain so the roses, which should have been printed on the bias, don’t run straight down the top.  This is one of those situations when grain definitely has to trump print!!  But now I know why the fabric was less expensive than it should have been… 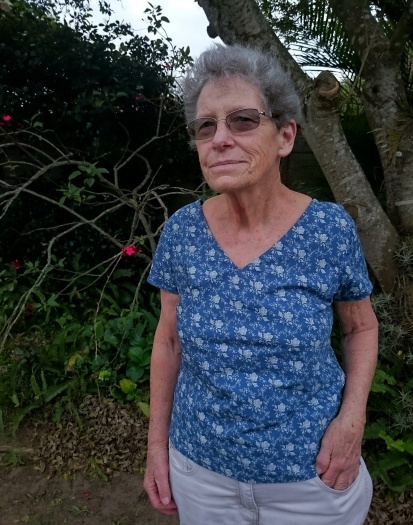 The top is so quick to put together, and all pieces are bias cut.  A little time was wasted trying to get to grips with Mum’s sewing machine, it doesn’t behave quite like mine do, but I wasn’t going to waste more time working out the overlocker.  The last three tops I made for her I ran up on my overlocker at home.  Boy do they get made quickly like that!!  The original pattern has raw edges on all hems and around the neckline, but Mum isn’t a fan of that unfinished look so I added 1cm hems and bound the neckline with self bias double folded.

Both tops are a hit and now I have a bit of sewjo back.  I brought over a pair of trousers I’d cut at home but run out of time to sew up before heading over.  The pattern is 106 from Burdastyle April 2016.  I loved it from the moment I saw it and bought metres and metres of border print viscose when I was in South Africa back in April/May to make a few pairs.  Needless to say, I never got round to using that stuff up at all, until now.  So on my sewing table at the moment is a half finished pair of viscose trousers that I’m very keen on finishing this weekend!  If I don’t get digging in the garden again….

BTW, Mum is getting better.  Although it’s quite literally, one step at a time.  Recovering from the operation is one thing, but a broken leg takes it to a new level.  Thankfully neither us has run out of patience just yet and we’re getting through her stash of wool quite nicely too!  Soon we’ll have empty yarn boxes to throw out and piles of crochet granny squares to donate to the local craft charity.

10 thoughts on “Sewing at the Seaside”