Sewing a seasonal wardrobe – and looking forward very much to summer and a three week holiday in the southern hemisphere.  I have a pile of fabulous linens from Ditto Fabrics in my favourite colours, and some piles of fabric in the stash still awaiting their turn to be sewn up too.  In order to get some progress made I decided to join a couple of Facebook groups last month,  One is the Sew-A-Longs and Sewing Contests page.  They’ve got a contest running from the beginning of February to sew up 8 garments that match and belong to a theme.  My theme, apart from sew as much as possible, is to have garments that co-ordinate with each other, and the other stuff in my wardrobe, that will be my summer and holiday wardrobe.

Sewing for the summer in the tail end of winter sounds great,  dreaming of linen trousers and drapey tee shirts in the sunshine.  But when you’re looking out of the window at frozen gardens, rain and now snow falling, it’s tempting to sew a coat instead!

I will post each garment once it’s finished and I have a photographer.  Mr Compulsive is a very, very reluctant photographer and Daughter No2 is away at university, so photo shoot opportunities are extremely rare.  I have actually finished a pair of jeans, 4 pairs of trousers, a jacket and two tee shirts.  No photos though….  Until today that is.  Daughter No2 came home for Mother’s Day weekend so I’ve co-opted her to get as many photos done as possible!  It’s darned cold though for photographing summer stuff…

I made these jeans in the first few days of February, they had their first outing for a visit to Birmingham to see Daughter no2 on a day off from lectures.  While there I bought more fabric, of course!  I got denim for another pair of Birkin Flares which I might make without the flare, and sweatshirting for two Sewaholic Fraser sweatshirts.  More Birkins? Of course, my first pair are worn at least twice a week!

My second pair of Baste and Gather Flared jeans is loved almost as much as the first, but due to the fabric not having as much stretch as required, they’re a teeny bit tighter!  I love the colour.  I’d bought this twill from Croft Mill Fabrics last year – or maybe even the year before – but waited until I had what I thought was the perfect pattern.  That’s one of the ways to grow a stash, by the way.  Buy fabric and then dither and procrastinate about which pattern you’re going to use before taking the scissors to it.

I didn’t use topstitching thread for this project at all.  I’d found a perfect colour match of ordinary thread and it’s worked out just fine.  I had to get the zip online though, none of my local stores had a 5″ beige jeans zip.  Jaycotts are pretty quick and before I’d even finished cutting & marking the pattern, the zip had arrived.  Pretty cheap too for a YKK zip!

I made the same alterations on the upper thigh and in the back crotch curve as the first pair, and as I was left with 8cm to chop off the bottom the first time round, I altered the pattern at the mid thigh and mid calf, taking out 2cm in each place, leaving 4cm to be removed from the hemline.  This pair went together just as easily as the first, and I made the same change in the zip, accessing from the left instead of the right.  I remembered to alter the direction of pressing of the back seam this time, so all seams and stitching lines up perfectly.

I am really happy with how the topstitching worked out on the yoke this time.  Generally I really love this pair, especially the colour, I just wish there was more stretch!  It means I have to work harder on losing that Xmas and Winter padding before we go away in mid April… 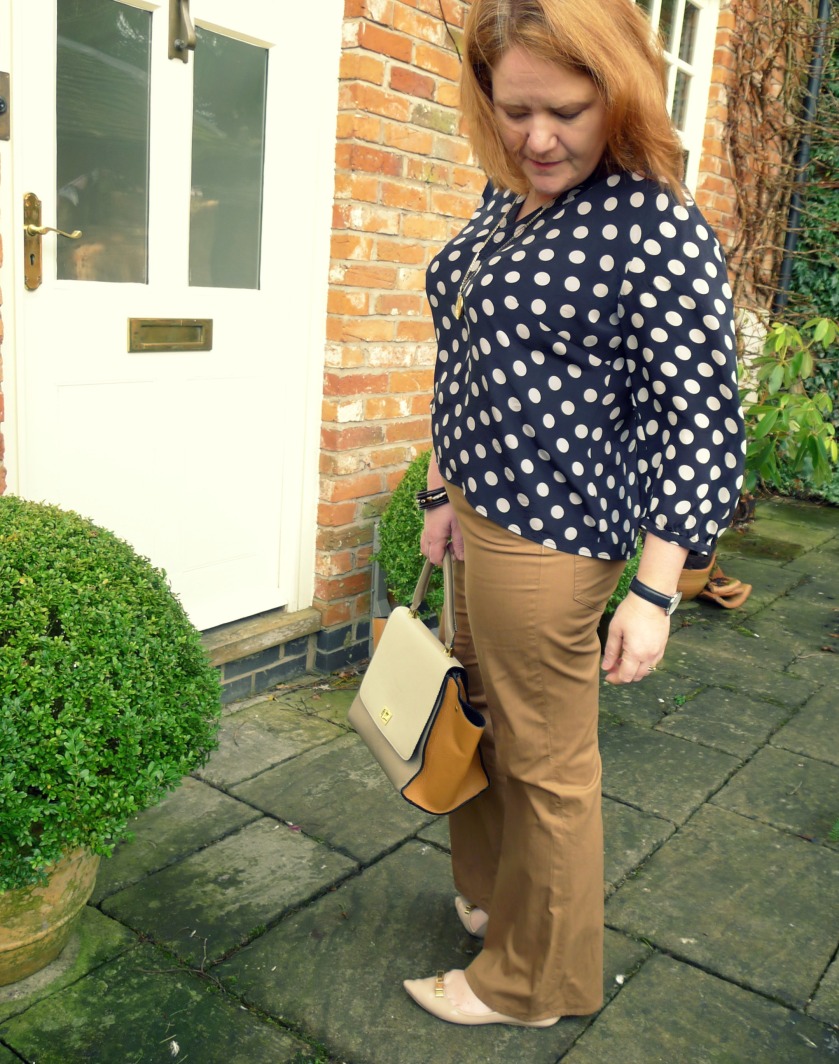 Back to getting more photos before the weather turns… 🙂

33 thoughts on “Changing of the Seasons”