I’ve made another blouse!  *Doing the Happy Dance*  A good tune for this particular Happy Dance is Goodluck’s “Le Good Life“.  Not heard of Goodluck? – not surprised really!  They’re a new South African band & they produce some smashing tunes!  Anyhoo, who wants to see the new stuff???

Heeehee, just teasing!  It was pretty chilly though, but you can get some glimpses around the scarf.  Not enough?  Humphf, I guess I’ll just get cold then.  Here you go!

Well???  Whaddya think?!  Me?  I love it!  It’s turned out better than I had hoped!  🙂  The concealed buttonstand is fab & I think my favourite bit is the collar! 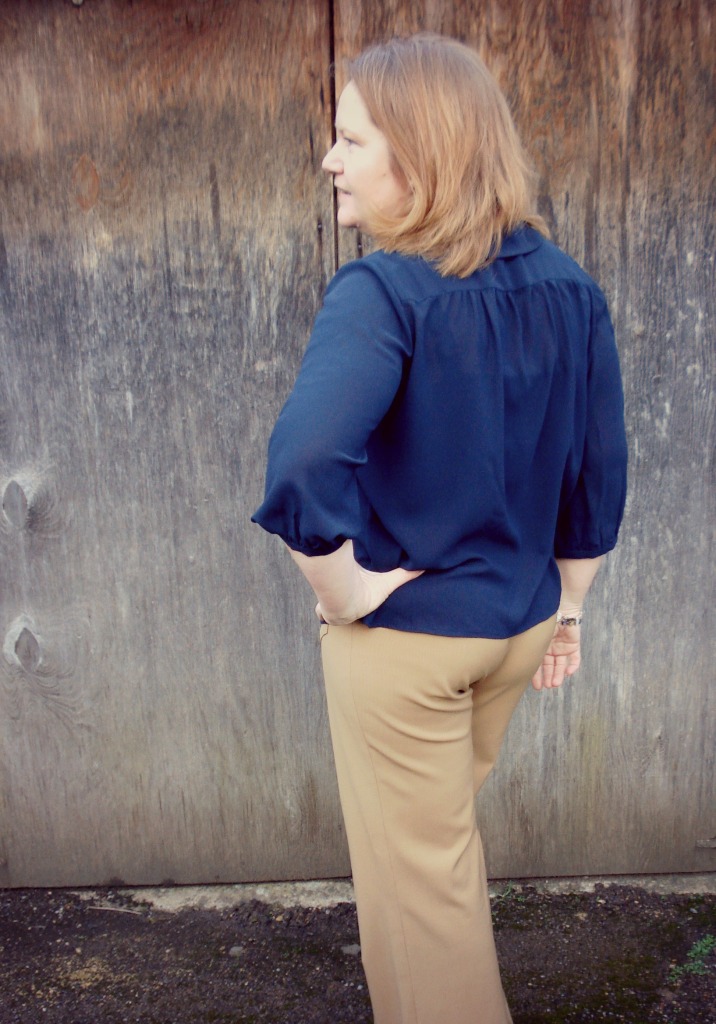 I guess you’d like a bit of info now, would you?  Right.  Starting with the sleeve, I traced the sleeve block with straight seams to the 3/4 length to be gathered into a narrow sleeve band.  They were pretty straight forward.  The back bodice has gathers into a yoke.  I used the same yoke depth for this as on the Polka Dot blouse from last week, but instead of having the gathers only above the shoulderblades, I added 3cm on the fold in the centre & gathered the entire length.  Again I shaped the hem as I have done in all the blouses so far.

The front yoke is 7cm deep, & has three 5mm tucks.  The original shoulder dart was altered so I have a small underarm dart & the rest was put into gathers into the front yoke.  I doubled both the front & back yokes for a bit of extra strength.  For the neckline I first copied the depth of the Jungle January blouse, knowing that I was comfortable with it.  The button stand is 4cm wide, so this was removed from the front & then fiddled with to make the tucks & the concealed bit.  It gave me a bit of a headache, but I worked it out in paper with all the folds etc before making the toile.

The collar is based on a flat collar, like a Peter Pan, but with a low rise.  Originally I made it 6cm wide, but after making the toile, I knew it had to be narrower.  Only 1cm came off, so I wasn’t too far off!  I didn’t use a facing on the inside.  The neckline & collar seams are all trimmed to just under 1cm & a bias strip covers all the messy details.

I used my favourite French seams throughout the blouse – even on the sleeve head.  This georgette isn’t as transparent as others I’ve used, but why go to all the effort of making something gorgeous if the inside isn’t as good as the out??

The buttons are some blue tinted mother of pearl that came out of my stash.  I wanted something without bulk & the shell buttons are less than 1mm thick!  I stitched the front tucked band to the band with the buttonholes on every third tuck, ensuring it would stay down & not go flapping about in the breeze.

That’s another piece of fabric that can consider itself well & truly stashbusted!  This means I have the opportunity of buying 1 more piece.  I need to start saving my allowances for the Stitching show at the NEC at the end of March.  This project also counts as my Sewcialist contribution to #SewBlueFebruary.  I may do another, but it’s good to get one in as the month is already halfway through!

I still need to trace & toile the HotPatterns jeans, & I found another of their jeans patterns in my pattern box!  I think I will have to do both!  🙂  I have also finally dug out some jersey & traced the Plantain pattern.  Let’s see if it fits!

As this blouse has turned out so well, I think I can go ahead now & make another using the navy spot silk chiffon Husband bought me from John Lewis.  Can’t wait to see that made up!

45 thoughts on “The Midnight Blues”