Hello?  Anyone still out there? I feel as if I am coming out from hibernation!  Spring in the UK this year has been so slow to arrive, and Winter so reluctant to leave, but there is rain and sun outside, so it’s time to get on.  I must admit that apart from the appaling weather keeping me from felling like blogging, I haven’t actually done any pattern cutting, which afterall, is what this blog is really supposed to be about.  That and fabric hoarding!  The Swap your Stash project co-hosted with Kat from Modern Vintage Cupcakes has gone really well, we had some amazing interviews, and it was great to see into other sewist’s hidey-holes.  I have to confess that it rather made me want to go fabric shopping, soo not the right thing to do!  So what has been going on in the last 2 months?

Well, I have still been sewing, and am currently working on project no 34 for this year.  Not all projects are clothing, but I have been keeping track of everything I make this year, just for interest sake. When I last blogged back in february, I was working on project no 15!  So here’s a glimpse of what I’ve been upto.

In the Stash Swap, I exchanged 2 pieces of silk for 2m of pink habutai from Becky from Sew and So.  It went into this dress from the March issue of BurdaStyle as the lining.  Thanks Becky, the colour is perfect!  For more details about this make, pop over to the BurdaStyle page.

Then I made some stuff for daughter No1, who came home for Mother’s Day weekend.  It was a nice suprise, but she had a problem, the standard university student diet of booze & pasta had had an unpleasant effect on her fitting some of her clothes!  So Mother’s Day weekend was spent making theseshorts & tees, again, more info is on Burdastyle.  All the fabric for these was from my stash, I’m doing well on the stash-busting front!

Inbetween the clothes, I also ran some of these up, not-so-little grey wool pincushions, free machine embroidered with an image of Hall’s Croft, one of the 5 Shakespeare properties in Stratford on Avon.

And a few more…

Then, to use up some of my stash of bits of silk, ribbons & braid, I made some lavender cushions & piled them up:

Through all of this, Kat’s swap parcel arrived…  I got a fab printed cotton that Daughter no2 wanted for a skirt, some stretch black lace that I will use for Daughter no1 & some rather scrummy New Zealand chocolate for me!  😀  I made the new blue t-shirt too.

Phew, what next..? Using the pattern for the above t-shirt (see the Mother’s day project for pattern details) I ran up another in a Liberty Print cotton jersey, but I don’t seem to have a photo of that anywhere… I also used up some stash fabric & made some PJ shorts for Daughter no2, in anticipation of summer.  Yeah.  Give us a while.

Using some black linen from my stash I made pants 123 from June 2011 BurdaStyle for Daughter no2.  As it was a petite pattern I had to lengthen it a bit, but the result was worth it.  She really likes them, & we are still going to make another pair in the spotty twill I got from Ditto fabrics back in January!  Details of the adjustments etc can be found on BurdaStyle.

The Sew for Victory project was a great hit with Daughter no2, and although I have made her a couple of 60’s patterns before, she hasn’t been hugely into the whole thing.  Until now.  She has added a fair few pins to my Vintage Pinterest board, and we’ve made a pile of the vintage patterns from my stash that she wants this summer.  One of these is a little seventies shirt-dress.  I made the first from a cotton viscose, and it’s ok, but I way prefer the second which I made with a John Kaldor print cotton Daughter No2 picked out at the Stitching show in Birmingham at the end of March.  Details as ever are on my BurdaStyle page.

Something more for Daughter No1.  She chose some black cotton with red roses at the Stitching Show for a pair of cropped trousers for the summer.  We settled on a pattern I’ve made for her before, Burda 7533.  It needed copious amounts of shortening and taking in, but the result is a fab pair of pants!

Two shirts follow, one vintage, one not!  I had cut out some stretch poplin with a small spot design last summer, and for some reason put it away.  Or it just got mixed up with the stuff that went back into the cottons box, but whatever happened, I found the cut pieces this month & decided to get it finished.  Thankfully it still fits!  The pattern is a Burda favourite that has been made many times now.

The second is a pattern from 1975.  I found the pattern in a charity shop last week for just 20p, and I pounced!  I found some ex Paul Smith stretch cotton with a multi-coloured stripe in my stash, leftovers from a previous project.  It proved to be just enough to get the short sleeved version out, & I can tell I will be using this pattern again!

Then another vintage make.  From the stash I had rescued a small piece of stretch navy & ecru twill, and some fucshia pink linen.  The linen went into the washing machine with some navy Dylon and we were in business!  I made a little 60’s dress with a contrast upper bodice, details on BurdaStyle.

Right, last, but by no means least was a pattern cutting project!  Like I said, Sew for Victory was a hit, and Daughter No2 picked out another piece of fabric for another version of the 1944 pattern I made in February.  Initially I did think this fabric was going to be too much, and i definitely left the ruffles off the front.  It would have been waay too Victorian, nevermind 40’s with this particular fabric.  It was finished off on Friday last week, and we took advantage fo the little bits of sunlight coming into the garden to take photos. 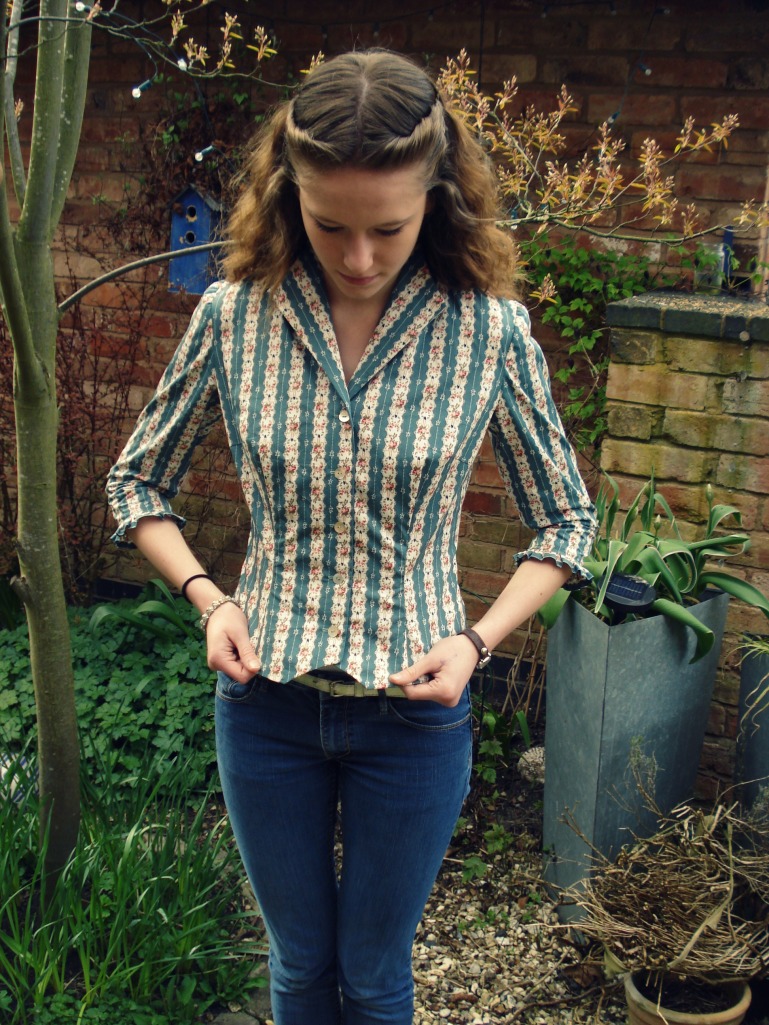 So I am steadily working my way through my stash, and trying very hard not to buy anything new unless I have used 2 pieces from the stash first.  So far so good, but this is what I bought (with a fair bit of help from daughters 1 & 2) in Birmingham in March.

Now 3 of those pieces have already been cut up, and they all have patterns allocated, except for the jersey in the middle on the right, but I’ve no doubt something will come up!  So I’m off to plan the next item to be sewn, and in the meantime, if you have been watching the Great British Sewing Bee & think you have a chance, they are apparently going to make another series and are taking applications now!  Rules and forms etc are available here.  Have fun!  😀

26 thoughts on “Daydreaming my way Through March & into April”