Better late than never, right?  These are two skirts I ran up after New Year for Daughter No1.  They both use up fabric from my stash, score!

One very simply cut from the straight skirt block with a shaped waistband & invisible zip.

Another developed from the straight skirt block, same shaped waistband as before, but this time a gored panelled skirt with piping in the seams.

The straight skirt first – the fabric was from my stash, the left overs from the trousers I made in the Autumn.  I usually over-buy fabric when I’m not 100% sure what I will make.  Anyone else have this problem?  Thus I am frequently left with pieces of about 50cm or so.  Thankfully daughter No1 was happy to have me use up this little bit for her skirt.  The lining also came out of the stash in the cupboard, (as did the lace & invisible zip) so I did well on this!

I thought it would be nice to have a pretty hem detail, the hem was edged with some black lace and hand stitched in place. 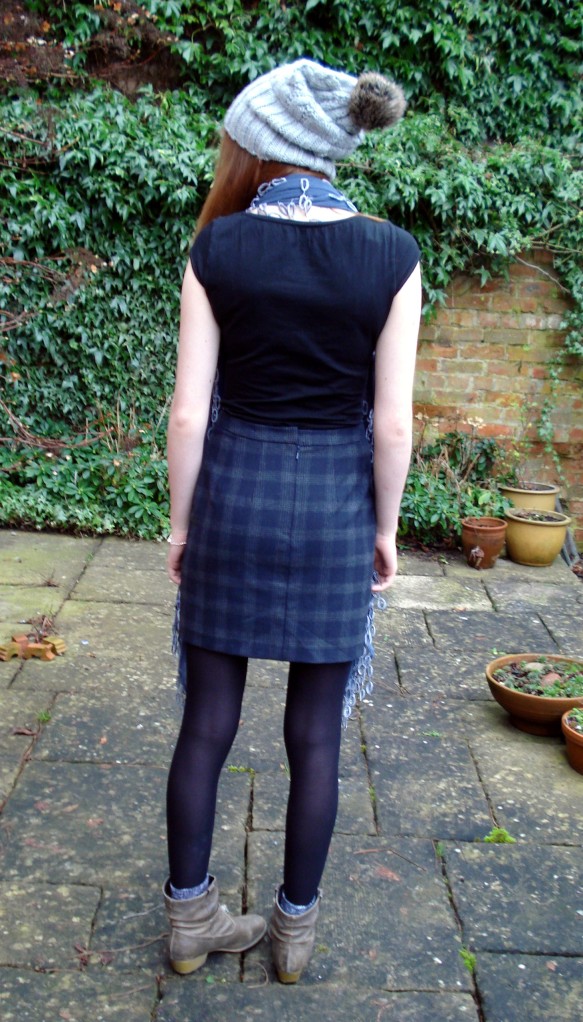 I used a skirt hook & bar for the waistband closure, rather than a button.

For skirt no2, I had some black & white heavyweight herringbone wool that I’d got from Harlequin Fabrics in Leamington Spa in September (£8 for 1.5m in the sale!).  I had originally thought to make a 60’s style skirt for Daughter No1, but she nixed the idea.  Instead she wanted a skirt with the same waistband as the straight skirt, and the same length.  I still wanted that a-line shape, and we compromised on a gored panelled skirt.  I had in my mind an idea to emphasise the panels, so went digging to see if I had any black bias binding in the stash boxes.  Instead, I found pre-made piping, perfect!

That piping has been hanging around a while, the lable is in Afrikaans, with a very cheap price tag in South African Rands.  I shudder.  It could be as much as 22 years old…  Nevermind, it has been used now!  😀  As you can see from the shiny black stuff in the picture, I didn’t use the wool to face the waistband.  Daughter No1 is a sensitive little thing, so I used some black crepe backed satin, again from the stash.

I piped the seams in the panels, and along the lower edge of the waistband.

The result…  I also bound the hem with black cotton bias binding.  The idea was that as it is fairly stiff, it will add bulk to the hem, making it stand out.  This herringbone also frays like mad!  I had overlocked all the seams to make sure we had no mad unravelling, because this skirt has to survive being washed in a machine at Uni…

You will notice I didn’t pipe the side seams…  There is a good reason, I promise.  1 – the invisible zip is in the other side seam, and invisible zips do not play well with added bulk, or piping.  2 – I had run out…

The making of these two pieces allowed me to buy that fabulous giraffe print for Daughter No2’s Jungle January jacket, and another two pieces from my stash have been allocated to another two projects, which is why I was allowed to buy some spotty twill from Ditto for Daughter No2 to make her Polka Dot offering for February.  In addition, I have (almost) finished a project from February’s Burda, just the hems to do, also using a piece from my stash.  Phew, this is exhausting!  I have finally succombed to keeping a note book to keep track of everything!

Has anyone else signed up for the Sew for Victory sewalong with Lucky Lucille?  That’s another job for February!  I have started on the pattern cutting, and identified 4 pieces of fabric to use!  Daughter No2 and I will both benefit from this little challenge, we have chosen blouse patterns, because we can bring them up to date with jeans etc.  So I had better get some sleep, because I need to crack on with the toiles tomorrow!

Don’t forget the Swap your Stash party is continuing, if you’d like to join in the swap, leave a comment below or on Kat’s blog.  You can also just show us your fabric stash.  Maybe it’s madly chaotic and leaves you a little frazzled, maybe you are a queen of organisation and can share some secrets with the rest of us.  The “questions” are available, just copy them onto your blog, fill in some answers and post some photos of your fabulous fabrics for us all to drool over!

20 thoughts on “A Tale of Two Skirts”